(Clearwisdom.net) Mr. Yang came from Shenzhen, Guangdong, China to study in New York. Currently he works in a bank on Wall Street. He and his sister watched the third show of the Chinese New Year Splendor by Divine Performing Arts. Both of them were very impressed with the show. 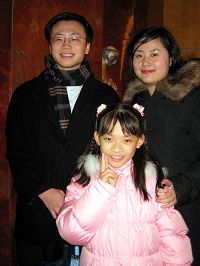 Mr. Yang and his sister watched the Chinese New Year Splendor and took a group photo with a young fan of Divine Performing Arts from Taiwan

Mr. Yang had seen the information about the show from advertisements and flyers in Chinatown. He was impressed that the show presented traditional Chinese dance, music, and a thorough presentation of Chinese culture. Mr. Yang said, "Music is the common language of human beings. The performance presented a perfect integration of excellent music and art. It impressed the audience." He was impressed most with the beautiful costumes and the drummers.

Mr. Yang's elder sister can be called a fan of Divine Performing Arts. This was her second time to watch the show. She recalled last year's show vividly. She admired the beautiful costumes and the dance movements. She was impressed with the new pieces in this year's show, especially the powerful performance of the male dancers.

Mr. Yang and his sister praised Divine Performing Arts for its presentation of traditional Chinese culture in such a pure, kind and beautiful manner. They said that this is culture that modern human being need.

Mr. Yang also talked about Falun Gong with a young fan of Divine Performing arts from Taiwan. He was told that there were more than one thousand practice sites in Taiwan and many Falun Gong clubs in schools. He was surprised to find that this practice, which is persecuted in China, has spread so widely and is welcomed in Taiwan.