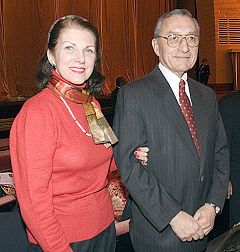 Jose Augusto Tenorio, the Consul General of Peru, and his wife

(Clearwisdom.net) On February 1, 2008, New York's Radio City Music Hall hosted the third performance of the Chinese New Year Splendor. Although it rained all day, the foul weather did not lessen the audience's enthusiasm. Many of the audience members of various ethnicities took the train from other states to come see the show. In New York, a major world arts capital, overseas Chinese have shown that one Chinese show can cause people of all races to respond - a truly a remarkable event.

Nurse: Those Songs Are Relevant for Each and Every One of Us (Photo)

(Clearwisdom.net) Gloria Taylor and Beverley Beresford are retired nurses, and Beverley took Gloria to the show for her birthday. On the evening of February 1, they came from Long Island to Radio City Music Hall to watch the show. "This was a wonderful birthday gift," said Gloria after watching the show.