Practitioners shared their experiences of clarifying the truth, studying the Fa, and looking inward. 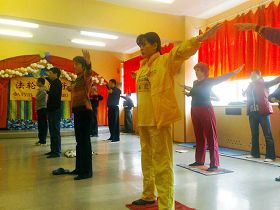 The group exercises at the Fa conference

One new practitioner, who has been practicing for three months, had an accident a year ago, in which he fell from a tall ladder. His feet were badly injured and he still cannot walk well. He attended the Fa conference on February 17 and studied the Fa and did exercises with other practitioners. After the conference, when he was walking outside, all of sudden he found that his feet were not painful and he was not lame anymore.

This miracle of Dafa solidified his faith.

“"Lies Don't Travel Far:" The CCP Continues Its Attempts to Interfere with the Divine Performing Arts in Germany”