(Clearwisdom.net) From February 1 to 3, 2008, the ninth Falun Dafa Camp for Young Practitioners was held at Chung Gong University in Tainan. Young practitioners from middle schools, high schools, colleges and universities gathered to study the Fa together, practice the exercises and share their experiences in the cultivation process.

The experience sharing began with practitioners talking about individual cultivation. Practitioners honestly shared their understandings and feelings on such topics as, Why did I learn Falun Dafa? Why do I want to cultivate? and, What is cultivation for? They also talked about how to balance school studies and cultivation, how to persist with Fa study and exercise, how to be a good person, how to handle relationships with the opposite gender, etc. After discussing personal cultivation, the sharing continued to such questions as, "What is a Fa-rectification period Dafa disciple? How to maintain righteous thoughts and righteous actions? How to break through the obstacles in my truth-clarification? Finally, they discussed their thoughts about Divine Performing Arts and the New Year Spectacular, and their understandings of the Fa-rectification process. The camp attendees valued this precious time and eagerly shared their own experiences.

One practitioner talked about how he had heart disease since he was born. The doctor predicted that he would not live longer than 18 years but now he is over 20. After he started practicing Falun Gong, he was in several car accidents and at one time he couldn't move his hand. But in the end, everything was fine. He sincerely thanked Master and Dafa for giving him a second life.

Another practitioner shared how he carries out truth-clarification in day-to-day life. For example, he wore a jacket with the words, "Falun Dafa," on it to school and clarified the truth to people he met. He set a standard for himself not to ignore any sentient beings near him who are waiting to hear the truth.

A small-scale experience sharing conference was scheduled on the 3rd day of the camp. Three students gave speeches at the conference. One speech entitled, "Age Doesn't Matter in Cultivation," reminded everyone to be more diligent in offering salvation to sentient beings and carrying out one's vow. Another practitioner's speech was called, "I Will Cultivate to Success." He admitted that his cultivation path was bumpy but he determined to cultivate until he succeeded.

At the beginning and end of the Fa-conference, two video programs, "Please Awaken the People Beside You" and "A Story about Eternity," were shown. Many in the audience were moved to tears. They gained a better understanding of what a Fa-rectification period Dafa disciple is and understood that no one should be left behind on the path of following Master home. 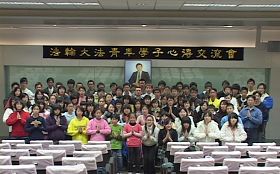 The camp came to a successful close after all attendees took a group photo to send Master Happy New Year greetings. They encouraged each other to do the Three Things well in the coming year and to make progress together.

“Switzerland: An Overview of the Activities of Swiss Practitioners (Part 4)”