(Clearwisdom.net) The Divine Performing Arts on Tour's Chinese Spectacular debuted in Duisburg, Germany, on February 13, 2008. The Spectacular is then scheduled to tour 15 cities and present more than 40 shows in Europe (http://www.bestchineseshows.com/tours/europe).

On the occasion of the Chinese Spectacular, European Parliament President Dr. Hans-Gert Poettering and Vice-President Edward McMillan-Scott accepted interviews with New Tang Dynasty Television and sent their New Year's greetings to Chinese people around the world. Vice-President McMillan-Scott commended the Spectacular, saying that is a reminder to people outside China of the eternal values of China. Below is the text of their greetings. 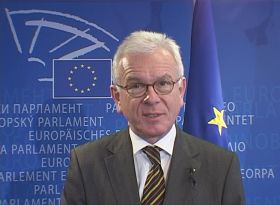 "I think that the cultural spectaculars, which have been mounted in European cities and elsewhere in the world, remind people outside China of the eternal values of China--the culture, the songs, the dances, the joy in life, which to many Chinese people is no longer part of their current reality, and indeed hasn't been since 1949, since the CCP began its brutal regime in China. So these festivals are a reminder of what China could be like--a China that is free, a China that enjoys human rights, a China that enjoys religious freedom, a China that enjoys cultural freedom--to remind people that there is an alternative, another China, the China of the future."

"This Chinese cultural gala will perform throughout Europe. This is a good opportunity to get many people together to exchange their cultures. I hope that the Chinese Spectacular brings the world's people closer together and helps to improve mutual understanding. I wish the gala great success."

“Japan: Debut of the Divine Performing Arts Chinese Spectacular in Asia Moves Audience Members from All Walks of Life (Photos)”