(Clearwisdom.net) The last two shows of the Chinese New Year Splendor, presented by the Divine Performing Arts, played to full houses at Radio City Music Hall on Saturday, February 9, 2008. Some in the audience pointed out that they decided to come to the show after they read a somewhat critical article in the New York Times. 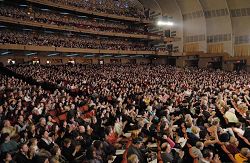 The 14th performance of the Chinese New Year Splendor by the Divine Performing Arts opened to a full house on February 9, 2008

The New York Times published a review of the show in the article "A Glimpse of Chinese Culture That Some Find Hard to Watch" on February 6, 2008. Many feel that the article distorted the facts and insinuated bad things about the Splendor. Yet, the article nevertheless drew crowds to fill every available seat for the Splendor's remaining performances in New York. 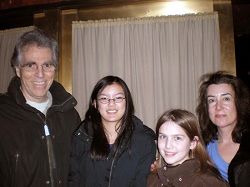 1. Gary Ware, a manager at Toshiba Corporation, brought his entire family to the New Year Splendor after reading the derogatory report in the New York Times 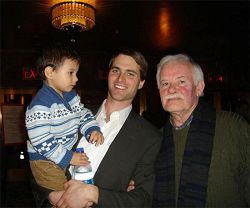 2. Eamonn O'Neill, a retired teacher (first on the right), his son, and grandson attended the Splendor 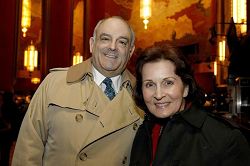 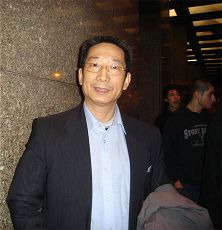 4. Mr. Liu who works at New York Freedom Times, said after seeing the final performance of the New Year Splendor on February 9, "The NYT report is terribly one-sided. I went out and bought my own ticket. I think the show is very, very good; it's a complete display of ancient Chinese civilization--a true rarity that is not seen in Mainland China. I think the NYT article is completely unjustified." 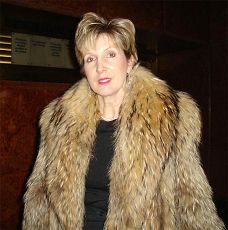 5. Cyndia, an elementary school teacher from New Jersey, said, "These performers are geniuses. The songs and dances are excellent, excellent. The singers are outstanding; they are extraordinary. The show delivers a wonderful message. What the New York Times did was a shame. I'll look up this article at the library when I get home and write to the reporter." 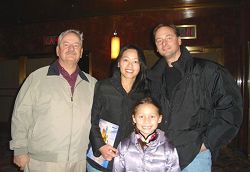 6. Patty Glab, a Chinese-Canadian, and her entire family saw the show the afternoon of February 9. Her husband, Ron Glab, and their daughter loved the dance, "The Risen Lotus Flower Flower."

Toshiba Corporation Training Manager: "I decided to see the show after reading the NYT article"

Gary Ware, manager of the nationwide Training Department at Toshiba Corporation, brought his wife Eileen and their daughter to the afternoon performance on February 9th after he read the NYT article.
Mr. Ware said, "I didn't see anything negative in this show. We come from different countries and many people have never been to China. We don't know what's going on there, and that's why I wanted to come see it."
He said the persecution of Falun Gong should be made known to the world and he didn't think there was anything inappropriate in the show's depictions of it.
"We should see the world with an open mind and a tolerant heart," added Mr. Ware.

Eamonn O'Neil, his son and grandson, attended the afternoon performance on February 9. He came to the show and expressed his opinion on the NYT article afterwards. Mr. O'Neil said about the "The Risen Lotus Flower", "I paid special attention to the dance that depicts a prison scene. From an artistic perspective, this was the best program. It was fabulous and touches the soul. At least it was for me." Regarding the NYT article, Mr. O'Neil said, "A lot of that article was ridiculous, with lots of complaining based on no legitimate reason."

Veteran banker: "It was not fair at all..." "And it might even be construed as unethical"

Ronald A. Sablosky, former Chairman of Keycept, Ltd., and his wife, Mary Ann Okles, vice publisher of New York Family, said after seeing the show on February 7, "The NYT article is totally unfair." Okles said, "I think the article is really unfair. I completely disagree with what was said in it. I think the reporter has strongly biased opinions, and although it appears he was making unbiased comments, actually he was not at all. They were only speaking from their own perspective.

"The article is unfair, completely unfair," said Sablosky, "But it's understandable. They [the NYT] have done the same thing many times before, so this is not the first time. If people know that, they will not care too much about what it says."

Mr. Liu, who works at New York Freedom Times said after watching the final show on February 9, "NYT article is very partial. I came today because I bought my own ticket. I think the show is very, very good. Its Chinese civilization and a complete display of ancient Chinese civilization. It's a true rarity nowadays and is not seen in Mainland China anymore. So I think the NYT article's standpoint is entirely wrong."

Cyndia, an elementary school teacher from New Jersey said, "The performers are geniuses. The songs and dances are really, really interesting. The singers are truly outstanding and extraordinary. The show delivers a wonderful message. What the NYT did was a shame. When I go home, I'll look up the article in a library and write to the reporter."

Popular opinion in favor of "The Risen Lotus Flower"

According to the NYT article, "the end of the number, more members of the audience, in twos and fours and larger groups, began to walk out." "The number" refers to the program "The Risen Lotus Flower," which depicts three imprisoned Falun Gong practitioners. During the February 9thperformance, however, the Minghui reporter noticed that no one left their seat after this program, and the performance ended with long-lasting applause.
Patty Glab, a Chinese Canadian attended the show along with three generations of her family. Her husband Ron Glab is a police officer. He said, "I especially liked the dance "The Risen Lotus Flower." I know Falun Gong practitioners are persecuted by the Communist Party for persisting in their belief. In fact, Falun Gong doesn't look like a religion; it's only meditation and does no harm to anyone. They should have the freedom to believe in what they want to believe and do what they want to do."
Glab's daughter said her favorite program was "The Risen Lotus Flower."
Sarah is a filmmaker and an artistic director. She said she particularly enjoyed "The Risen Lotus Flower." Sarah said, "One girl was beaten to death by the police for helping her friends, but she returned to encourage her friends. The choreography was perfect, very beautiful."
Judging from audience feedback, the negative tone of the NYT article did not echo with many Americans. Nevertheless, the Minghui reporter noticed something interesting during the afternoon show on February 9. Four Chinese men dressed in government official attire in front-row seats didn't applaud after each program, and instead they looked around to see the audience's reaction. When they saw that no one moved after "The Risen Lotus Flower," they looked disappointed and left during intermission.
The 11-day run of the Splendor in New York welcomed people from all walks of life, including Wall Street moguls, well-known artists and musicians, political dignitaries and of course, Chinese from all over the world and especially from Mainland China.
The audience heaped praise on the Splendor and called it "world-class" and "first-class." They thanked the Divine Performing Arts for bringing traditional art and values to New York and the world, and for invigorating the Chinese New Year. Many Chinese people were proud of the performance because it celebrates their heritage.
A New York artist predicted, "The Divine Performing Arts is a new artistic brand that has conquered New York and is entering the world."

“Audience: Praise for the Splendor, Shame for the New York Times (Photos)”