Mr. Zhang Litian was a 36-year-old Falun Gong practitioner in Chaoyang City, Liaoning Province. After Mr. Zhang was illegally detained in Jinzhou Prison for over a month, Cheng Jun, the head of Division 20, and Zhang Baozhi, the assistant head of Division 20, instigated four inmates to beat Zhang Litian to death on November 17, 2008. Recently, some goodhearted people hung wreaths and banners near Jinzhou Prison to commemorate Mr. Zhang and publicize the fact that he was tortured to death. We hope conscience and justice will prevail, and the persecution will end. 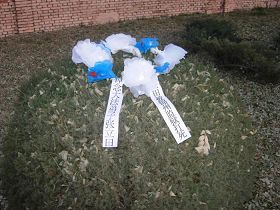 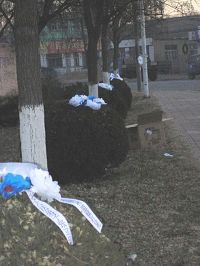 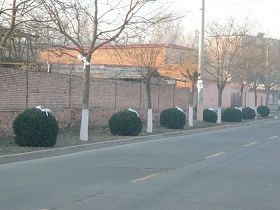 Mr. Zhang Litian was born in Laizhou City, Shandong Province. He previously worked at the Chaoyang Fine Steel Plant in Liaoning Province. After practicing Falun Gong, he followed the principals of Truthfulness-Compassion-Forbearance. He became more tolerant and generous and more diligent at work. After the Chinese Communist Party (CCP) started persecuting Falun Gong, he was harassed and persecuted by local police officers many times. In April 2008, while he was in Shandong Province, officers from the Jinzhou City Police Department and Taihe District Police Department arrested him and took him to Jinzhou City. He was then detained in the Jinzhou First Detention Center. In August 2008, he was sentenced to a five-year prison term. In October he was taken to Jinzhou Prison, Division 20. On November 17, he was tortured to death. Zhang Litian has a father over 70 years old who is often ill. He also has a nine-year-old daughter in elementary school.