The audience in Philadelphia was enthusiastic about the second and third Divine Performing Arts shows in the Merriam Theater on the afternoon and evening of December 20, 2008. 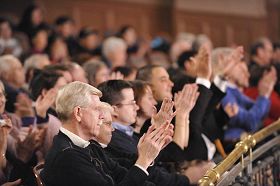 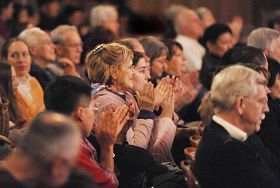 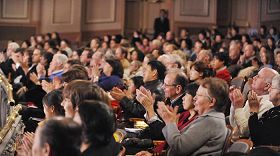 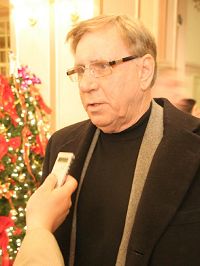 Mr. Bill Dain, president of a steel company, said the music was excellent

Mr. Bill Dain, who is president of a steel company, said he often goes to the theater to see different shows. He said, "I'm very, very pleased. It's excellent! Excellent! The music was excellent! The dancing was superb! And I understand the stories told. I think that connects to anyone. It's life. It's life lessons." 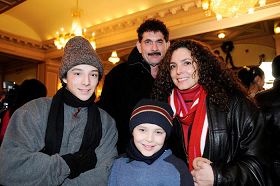 Ms. Sandra DiLaura teaches Spanish at the University of Pennsylvania. She, her husband and two sons saw the show together. She said, "It is very creative! The dances are colorful! It is great!" Their favorite number was "The Monkey King Triumphs," because ten-year-old Jake and high school student Jessie had watched a movie about the Monkey King before. They loved the action. Jessie loved the music too, especially the two-string erhu solo by Qi Xiaochun.

Ms. DiLaura said she felt the show was very peaceful and special. Jessie was amazed the artists could tell the story without any words. He could see that it wasn't easy to do, but the artists did a great job and he could follow the story. Ms. DiLaura and her family hadn't heard about Falun Gong before. They were shocked to know that such a peaceful practice was persecuted in China. 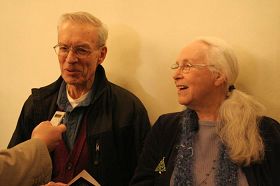 Mr. and Mrs. Swan were touched by the dance about Falun Gong practitioners being persecuted

Mr. Birk Swan is a retired engineer from Bell Labs. He and his wife are interested in the arts and regularly attend orchestra concerts. Mr. Swan said his thesis director in college was a Chinese physicist. He remarked that the women dancers were so pretty and the men were very energetic. He exclaimed, "The dances are great!" Both Mr. and Mrs. Swan were very moved by the dance about the Falun Gong practitioners being persecuted. Mrs. Swan has done Tai chi before, and they had heard about the persecution of Falun Gong. Mr. Swan said it is part of the human nature to thrive, not to be suppressed.

Ms. Paula Susan is a psychotherapist who focuses on trauma and relationships, and a writer. She said, "I loved all the pieces. The two-string (instrument) (Erhu) just made it into my insight and made me soar. The voice was marvelous! the dancing was marvelous! The color! It's just exquisite experience as a piece of art! As a piece of cultural information, it's powerful!...It fills me with hope! Because you're trying to reach all the people to remind them what's important. If we don't have truth, we don't have anything. I've been watching their shows for a number of years. The first time was in NY. It was just exquisite! The performers are exquisite! The costuming is exquisite! And the message is important!... I've been to China. I have close Chinese friends and I know what's going on, what's real. [This] is a marvelous way to remind Chinese here what is real and what's important."

The last show of the DPA in Philadelphia was scheduled for 2:30 on December 21.