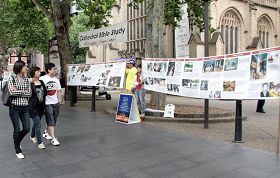 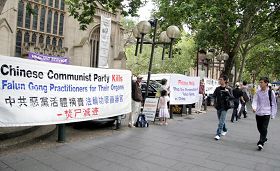 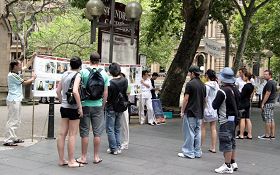 People examined the photos exposing the CCP's torture of practitioners 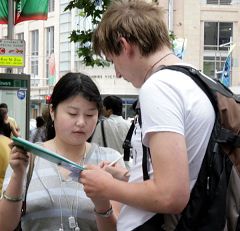 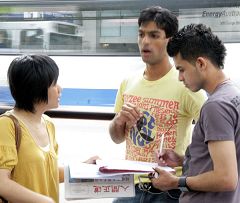 Mr. Zeng Lin, the organizer of the event, said, "It is International Human Rights Day today. Falun Gong practitioners gather here to let the Australian people know that the CCP's persecution is still going on. The CCP has killed Chinese people ever since it took power. Under its control, people are not allowed freedom of belief. Since 1999, the CCP has persecuted Falun Gong. It has even harvested vital organs from living practitioners for lucrative profits. It not only infringes on human rights but also damages human beings' moral values and conscience. We are here to let people know the facts and to call for help to end the persecution."

During the event, the poster boards exposing the CCP's persecution caught the attention of passersby. Some came forward to sign the petition.

While looking at the posters detailing the the types of torture used by the CCP, Mr. Arthur Nobinson, in his 50s, asked practitioner Nina, "How can this happen? In such a civilized society as today's, how can people be brutally persecuted for believing in Truth-Compassion-Forbearance?" He could not understand since in Australia there is freedom of belief. Nina explained to him that the CCP regime is a totalitarian one and does not allow people to have their own belief. Mr. Nobinson eventually understood and signed the petition calling for an end to the persecution.

Gary, a linguist in his 60s, can speak Chinese because he taught English in a school in Nanjing for six years. He said that every Chinese should support Falun Gong because Falun Gong's principles are Truth-Compassion-Forbearance. He signed the petition.

One university student was shocked to learn of the CCP's atrocities and could not believe that such things are occurring even now. He said he had never heard about such cruel persecution. He asked how he could help. He said he would tell his classmates so that they could help to stop the persecution. He requested a copy of the Nine Commentaries on the Communist Party and some information flyers to bring to his classmates.

In the evening, practitioners held a candlelight vigil to commemorate fellow practitioners who have been tortured to death by the CCP and to call for an end to the persecution.