Ms. Liu Xiaolian's Death a Premeditated Act of Murder by the CCP (Photo)

This article describes how Falun Gong practitioner Ms. Liu Xiaolian's death was a premeditated act of murder, rather than a "death-as-a-result-of-torture" incident. 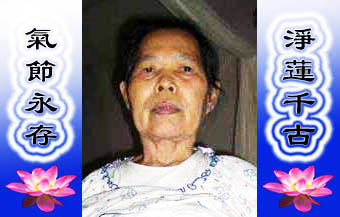 Ms. Liu Xiaolian was a kind, country lady who lived in Chibi Town, Chibi City, Hubei Province. She firmly kept her faith in Truthfulness-Compassion-Forbearance despite the fact that she was illegally detained four times, for a total of five years and four months.

While she was imprisoned, Ms. Liu suffered numerous hardships, including being subjected to a brutal torture method called, "Five Horses Splitting a Body (1)." She was also beaten with metal shackles, injected with poison, force-fed poisonous pills, shocked with high-voltage electric batons and needles, and humiliated by male prisoners. Ms. Liu died on October 26, 2008, at the age of 68.

On December 14, 2003, an article entitled, "Surviving Extreme Torture - A Lotus Flower that Never Withers" was published by a Chinese overseas media group (http://www.minghui.org/mh/articles/2003/12/14/62500.html). The article exposed the many methods of torture used on Ms. Liu, including the inhuman "Five Horses Splitting a Body," which resulted in her private area being torn.

The same day the article was written, Chinese Communist Party (CCP) personnel read it and saw that Ms. Liu was being described as a "lotus flower that never withers." This made them angry, afraid, and revengeful. They went to Ms. Liu's home and illegally arrested her for the third time. The day after her arrest, an English translation of the Chinese article was posted on Clearwisdom.net: (http://www.clearwisdom.net/emh/articles/2003/12/29/43582.html).

On January 10, 2004, when Ms. Liu was taken to the Chibi City First Detention Center, Director Deng Dingsheng hit her on the head as she was entering her prison cell, saying, "We will not stop doing the 'Five Horses Splitting a Body' on you." Deng is the main person responsible for torturing Ms. Liu on December 6, 2002.

The Chibi Town CCP deputy secretary, Zhou Xinhua, told Ms. Liu's husband, "The 'never withering lotus' will wither this time, for sure. If we kill her, how much compensation will you be seeking from us regarding her funeral expenses?"

In order to make Ms. Liu "wither," the CCP used every torture method they could think of. On February 4, 2004, Mr. Theo van Boven, a United Nations' anti-torture specialist, called the prison seeking information on Ms. Liu, and issued an urgent report to a United Nation Freedom of Speech authority.

Although the CCP murder plan was effectively delayed, that didn't stop them from torturing Ms. Liu day and night. On February 19, 2004, Deputy Director Qian Yulan (female) viciously beat Ms. Liu on her head with a leather boot, causing blood to pour from her eyes and ears, soaking her body and her cotton bedlinen.

Due to these endless rounds of torture, Ms. Liu became paralyzed and was unable to take care of herself. In an effort to escape the responsibility of her impending death, the Detention Center Administration had Ms. Liu carried home on May 29, 2004.

But on April 26, 2006, Ms. Liu was arrested for the fourth time and taken directly to the Puqi Textile Corp Mental Hospital. Below is Ms. Liu's harrowing account of being detained at the hospital:

"My name is Liu Xiaolian. I am 67 years old [in 2006.] On April 26, 2006, I was arrested and thrown into the evil's den. For over three months, depraved men tried to get me to cooperate with them, almost killing me in the process. I refused to give in to the terror. A physician known as Chairman Zhang made a pact with the Chibi Town government and the police, agreeing to poison me with drugs for the sum of 6,000 yuan. Chairman Zhang and his accomplices tortured me with high-voltage electric batons and further shocked me with electric needles for four hours. He also ordered young male psychiatric patients to insult, curse, beat, and sexually harass me. He force-fed me with drugs that were harmful to me. He also subjected me to one day and one night of an intravenous infusion consisting of 11 lbs of poisonous fluid. Afterwards, the skin on my entire body turned dark, and I passed out for two days and two nights. When I came to, I had lost the ability to speak."

After being detained and tortured in this mental hospital for two years and four months, Ms. Liu's entire body became very swollen. She found it difficult to eat and felt like she was on the verge of death. In fact, a doctor there was so sure that she would only live for another 20 days that he authorized her release in September 2008.

The previous times that Ms. Liu was released, her pores had oozed blood, which would then dry on her skin. But this time, her son didn't see anything coming out of her pores, and neither was she able to urinate. Her whole body was badly swollen, and when her son looked at her muscles, the only thing he could see was a mushy mass of rotten flesh under her skin.

When Liu Xiaolian's family took her to see a doctor, the medical staff there found it very difficult to look at her, let alone treat her. They found that due to the severe beatings she had received, Ms. Liu's heart was dislodged from its natural position in her chest cavity, and none of the four chambers of her heart were functioning properly.

Officer He from the Chibi Town Police Station thought it was a miracle that Ms. Liu had survived five years and four months of torture and imprisonment, saying that most people would have died a long time ago. As a result, the police were very afraid that another miracle might occur while Ms. Liu was home recuperating.

When her family took her to the hospital, Doctor Chen, the family's physician, was away for two days. After he came back and did what he could for Ms. Liu, she checked out of the hospital. Suddenly, many blisters started appearing under her skin. Ms. Liu died on the afternoon of October 26, 2008.

The CCP must be very pleased that Ms. Liu--this "never withering lotus flower"-- finally withered at home, instead of in their custody. As a result, they can cover up their murderous crime with a simple notation on their prison records: "Death due to sickness at home."

(1) Five horses splitting a body - A torture method in which the limbs are pulled tightly in four directions as the person is beaten. The person suffers intense pain as if the body is being split apart. See illustration and detailed description at: http://www.clearwisdom.net/emh/articles/2005/3/9/58287.html

“A Western Practitioner: From the Illusion of "Modern Independent Lifestyle" to Truth-Compassion-Forbearance”