Ms. Lu Guiling, 48, from Jiangjiazhai, Wenquan Town, Weihai City, Shandong Province, was arrested and brutally persecuted repeatedly because she clarified the truth about Falun Gong to the public. On November 12, 2008, at around 10:00 a.m. she was arrested at her home by 610 Office head Liu Jie of the Huancui District Police Department in Weihai City. Ms. Lu was subsequently illegally sentenced to 19 years in prison by the Huancui District Court in Weihai City. She is currently in the Shandong Province Women's Prison and being subjected to brutal persecution.

Ms. Lu was fortunate to learn Falun Dafa in August 1996. After studying the Fa and practicing the exercises, her body and mind were purified and her family life became harmonious. After July 20, 1999, when the Chinese Communist Party (CCP) started persecuting Falun Dafa, she was persecuted several times. Each time she endured the tribulation with firm belief in the Fa. She let go of the thought of life and death and expressed the compassion and kindness of a practitioner, which even touched the evildoers.

On February 22, 2000, Ms. Lu and a few other practitioners went to the National Inquiry Bureau in Beijing to peacefully appeal for Falun Dafa and clarify the facts about the practice and its benefits to society. They were arrested and held in the Weihai City Agency Office in Beijing, where they were brutally beaten and shocked with electric batons. The police also used a foot-long, finger-wide stick to hit their faces, turning them black and blue. The police then poured cold water all over them. Two days later, two officers from the Wenquan Police Station took Ms. Lu back to Weihai City and confiscated 1,400 yuan, which she was carrying with her. She was detained for 15 days and fined 1,500 yuan.

On January 2, 2001, Ms. Lu was taken by officers from the Wenquan Police Station again and was arrested and held at the detention center for 16 days.

On the evening of April 28, 2002, at about eight o'clock, several officers broke into Ms. Lu Guiling's home and held her in a basement. Officer Liu Jinhu from the 610 Office of the Huancui District Police Department, along with another police officer attempted to coerce her into giving up her belief in Falun Dafa, but she refused. Liu Jinhu brutally beat her, cursed at her, and pulled her hair. Large bunches of her hair fell out. That same night, she was transferred to a detention center. The second morning, she was transferred again to another detention center by 610 Office head Liu Jie of the Huancui District Police Department. In the detention center, she held a hunger strike to protest the brutal persecution and was force fed. She was restrained in an iron chair outside the room for days and nights. She was extremely cold and hungry, her buttocks developed blood blisters, and she became very thin and even spat out blood. Her life was in grave danger. The police had to release her, but they also threatened, "We will release you now, but we will arrest you again after you recover." After she was released, Ms. Lu had to leave home to avoid further persecution.

In order to more effectively save the people who were being deceived by the CCP lies, Lu Guiling and three other practitioners helped to intercept TV signals to clarify the truth. On January 23, 2003, she was arrested by the Weifang City Police Department and detained at the Weifang City Detention Center. She held a hunger strike to protest her detention and was force-fed. The police inserted a tube into her stomach for a long time, which and caused her to spit blood frequently. She fainted on the tenth day of the torture, and the police took her to the hospital for emergency treatment. She didn't regain consciousness until the next day and she was extremely weak.

On February 8, 2003, Liu Jie, the 610 Office head, arrested Ms. Lu and took her to the Rongcheng City Brainwashing Center. 610 Office head Xing Jianping (female) from the Rongcheng City Police Department was notorious for brutally torturing practitioners. Xing incited a few people to torture Lu Guiling and deprive her of sleep for two weeks. If Ms. Lu fell asleep, Xing used a toothpick to stab her palms and feet, forced her to stand, forced her to walk, and dragged her to the windows to make her stand in the cold wind. Xing tried to make Ms. Lu watch the brainwashing videos made by the CCP, but she refused. Xing then kicked her legs with all her strength. She grabbed Ms. Lu's ankles, cuffed her hands behind her back, and bound her to the iron chair. Ms. Lu Guiling was immobilized for several days, which made her hands numb for about six months. The police used all kinds of brutal ways to torture her in attempts to force her to give up her belief. But her righteous belief in Falun Dafa made the police desperate. At the end of February, the 610 Office transferred her to the Weihai City Detention Center. Later, the Huancui District Court in Weihai City sentenced her to 19 years in prison.

Since Ms. Lu Guiling was arrested on January 23, 2003, she has repeatedly used hunger strikes to protest. A few male criminals in the detention center handcuffed her onto an iron chair and force-fed her every day to torture her. She held a hunger strike for more than three months and became extremely weak. On May 14, she was taken to the Weihai City Hospital. One armed police officer and one detention center official watched her every day. She was forced to wear heavy fetters every day and was cuffed to the bed. On June 9, she was sent back to the detention center. Ms. Lu held the hunger strike for five months and by July 18, her life was in grave danger. The police had to release her. Two months later, even though she had not yet recovered, Huancui District Court official Zou Dakai and three police officers took her back to the detention center. The next day, she was taken to the Women's Prison in Shandong Province.

In the prison, Ms. Lu held another hunger strike for nearly four months. She was force-fed and endured brainwashing every day. She was badly injured physically and mentally. Her weight fell from 65 kilograms (143 lbs) to 31 kilogram (68 lbs). Although she was brutally tortured, she persisted in maintaining her belief in Falun Dafa and Truthfulness-Compassion-Forbearance. She shouted "Falun Dafa is good" again and again. In her heart, she had no hate for the people that tortured her. Instead, she had compassion for those who were ignorant of the crimes they were committing. This compassion, which exceeds human love, finally touched everyone around her, including the criminals and the police. They started to worry about her safety.

The prison warden saw that Ms. Lu was in extremely poor health, so she suggested sending her home many times, but the the Weihai City 610 Office refused to comply. Finally, after many troubles, Lu Guiling was released on bail for medical treatment on January 15, 2004. After she returned home, she recovered magically under Teacher's protection, which again is a testimony that Dafa is the most extraordinary science. After she recovered, she was forced to become homeless again. She continued to clarify the truth to the people and expose the CCP's poisonous lies.

Lu Guiling, before being persecuted 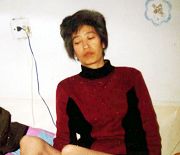 Lu Guiling, after being persecuted (2004)

On November 12, 2008, at 10:00 a.m., when Ms. Lu returned home to visit her family, 610 Office head Liu Jie from the Huancui District Police Department in Weihai City led police to break into her home and arrest her again. She is now being brutally mistreated in the Women's Prison in Shandong Province.

“Believing in Teacher and Dafa, Firmly Walking the Cultivation Path”