Ms. Xu Youqin, a practitioner from Shuangcheng City in Heilongjiang Province, was sentenced to 15 years of imprisonment. Her husband Mr. Zang Dianlong died as a result of persecution. Her mother-in-law found it hard taking care of Ms Xu's two children and under such huge mental and physical pressure, the mother-in-law passed away in mid-September 2008. Left alone with no one to care for them, the two children requested the authorities of the Heilongjiang Province Women's Prison to release their mother. 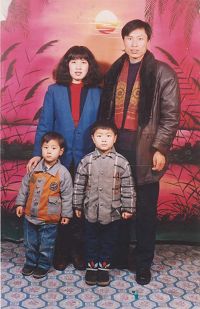 Ms. Xu Youqin, about 40-years-old, lived near the railway station of Shuangcheng City. She was arrested in 2002 and sentenced to 15 years of imprisonment. She suffered all sorts of abuse in the Heilongjiang Province Women's Prison and her family was destroyed due to the persecution. According to other practitioners who suffered abuse in the Heilongjiang Province Women's Prison, Ms. Xu had bamboo strips inserted under her nails, she was shocked with the electric batons, tortured on a tiger bench and forced to run under the scorching sun. She was soaked with cold water after fainting and forced to run again. Ms. Xu and other practitioners' pants were removed and they were beaten with a plank and shoes, and then their wounds were soaked with salty water by the guards.

Ms. Xu Youqin used to have a complete family. Her husband Mr. Zang, their two sons and her mother-in-law all lived together. Before practicing Falun Gong, her husband had developed leukemia. The expense of the treatment and deposit would cost more than 100, 000 yuan, which was beyond their capacity to afford. At that time, her mother-in-law began to practice Falun Gong and experienced the power of Dafa, and so the elderly lady urged her son to practice Falun Gong. With this encouragement Mr. Zang then began to practice Falun Gong with his mother. Two months later, he went to the Harbin City Hospital for a check-up and his illness had disappeared. He felt energetic, and the doctors were all shocked.

After the Jiang clique began to persecute Falun Gong in 1999, Ms. Xu and her husband went to Beijing to appeal for Falun Gong. They were arrested, but Mr. Zang managed to escape. Since the couple persisted in their belief steadfastly, they were seen as key people and monitored and harassed by Zhang Guofu, the deputy director of the Shuangcheng City Police Department, and police officer Jin Wanzhi (female).

On April 19, 2002, the police launched another round of surveillance and arrests in Shuangcheng City. More than 700 anti-riot police officers were called in from Harbin City. They began a blanket arrest of the practitioners. In the arrest warrant, the police offered a 30,000 yuan reward for the arrest of Ms. Xu Youqin, 20,000 yuan for Mr. Zang Dianlong and 20,000 yuan for another practitioner, Ms. Tie Junying. The police also spread a false rumor on television that the three practitioners were criminals at large and killed people. At that time, most of bus stations, train stations and exits of the city were stationed with police officers to inspect passing vehicles. Some police officers and the CCP's agents tried hard to gain the awards. They took photos with them and walked into the crowds to compare. One officer found a person who looked like Ms. Xu and he followed her, broke into her home at night and arrested her. It turned out later that she was in fact not Ms. Xu.

Ms. Xu's sons used to study in the No. 4 Primary School of Shuangcheng City, and were dismissed for explaining the facts about Dafa. To avoid the siege and pursuit by police, Ms. Xu, her husband, and their two sons walked down a muddy road and arrived in Acheng City, which is about 50 km away from Shuangcheng City. Just a few months after they set up in Acheng City, Ms. Xu was arrested when she went outside. Afterwards, Zhang Guofu colluded with the police in Acheng City and the anti-riot team in Harbin City to surround the community where Ms. Xu lived on the afternoon of July 8, 2002. The police officers broke in from the window. Mr. Zang was forced to jump from the sixth floor and died on the spot. Their two sons 14-year-old Zang Haoran and 12-year-old Zang Haotong, were handcuffed and brought to the office of the 425 special team in Harbin City, which was specifically set up for this case. After being detained in Harbin City for one month they were taken to the Wanjia Forced Labor Camp. They were detained at Wanjia for more than one month, becoming covered all over with scabies.

Ms. Xu was sentenced to 15 years of imprisonment and her two children were leading a hard life with their 70-years-old grandmother. The authorities of the prison prohibited family members from visiting Ms. Xu until two years later. On September 13, 2004, her mother-in-law met with her for the first time. At that time she was extremely thin due to the abuse. Since she refused to put on prison clothing, all her clothes were burned. In March 2004, Ms. Xu and other practitioners were tortured with the "Big Hang Up" (see http://www.clearwisdom.net/emh/articles/2004/11/17/54624.html for illustration).

Ms. Xu's mother-in-law overcame all sorts of difficulties in her life. She behaved according to the principles of Truthfulness-Compassion-Forbearance and treated people kindly; including the evildoers who caused her son's death. One time, she went to the police department to visit Zhang Guofu, who turned pale, fearing that she would try to get even with him. The elderly lady said, "I came to ask you to stop doing evil with the CCP. You caused my son's death because you were deceived by the CCP. As a Falun Gong practitioner, I treat everyone compassionately. So I came to urge you to quit the CCP. This is a way you can save yourself."

Under the CCP's long-term persecution, Ms. Xu's mother-in-law passed away in mid-September 2008. Her two children were left alone and have requested the authorities of the Heilongjiang Province Women's Prison to release their mother. We also call on international investigative organizations to look into this case, bring the evildoers to justice and unconditionally release all detained Falun Gong practitioners.

“Canopies Spared by Faith in Dafa”