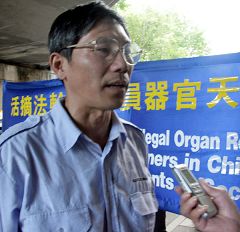 Mr. Yan Zhihui, a Falun Gong practitioner, stated: "Zhou is one of the murderers who persecute Falun Gong. He is trying to avoid us, but will fail. We have been holding banners at the gate of the hotel. When he got out of his car, he and his followers saw our banners. He didn't dare to get out in front of the hotel. Instead, he stopped far from the gate. He also heard us shouting 'Bring Zhou to justice.'"

Mr. Yan said, "Many tourists in the hotel were wondering what was going on and I told them how Zhou and the Chinese Communist Party persecute Falun Gong. Some of them said that they would tell Zhou to stop the persecution if they ran into him in the hotel."

Mr. Yan's mother, Li Fuying, was arrested and jailed twice in 2000 because of her belief in Falun Gong. She was badly tortured in the prison. Mr. Yan's sister, Yan Haiyu, was imprisoned for three years and was also tortured. Policemen hung her up for 24 hours.

Mr. Yan said Zhou and his followers persecute Falun Gong practitioners in China, and they also try to bring their hatred overseas. "The Australian government should deport him," Mr. Yan said.

Frank, a practitioner from Brisbane, said it is shameful for the Australian government to welcome such a murderer, using tax payers' money.

Many people saw the protest and accepted informational materials from Falun Gong practitioners.

“Experiencing the Wonders of Falun Dafa”