(Clearwisdom.net) On November 4 2008, one day after Director of (Mainland) China Straits Exchange Foundation Mr. Chen Yunlin arrived in Taiwan, about 3000 Falun Dafa practitioners held a large group exercise in front of the Liberty Gate in Taipei. The Falun Dafa Association of Taiwan held a press conference calling upon Chen Yunlin and his delegation of 46 CCP officials to take the opportunity of visiting Taiwan to renounce the membership in the CCP.

Group Exercise and Appeal to Stop the Persecution

Group exercises is one of the forms of cultivation that Master Li has given Falun Gong practitioners. Taiwan has more practitioners than any other country outside China, and many large scale group exercises have been held there, showing the harmony and beauty of Falun Dafa to the world.

Falun Dafa was introduced to Taiwan in April 1995. People from all walks of life have begun cultivation, including university professors, doctors, lawyers, engineers, civil servants, police officers, farmers, business people, students, homemakers and so on. Over 1,000 practice sites covering over 300 townships and towns across Taiwan have been established, as well as over a dozen practice sites on Taiwanese islands such as Penghu, Jinmen and Mazu.

Over the past 13 years, Falun Dafa has spread to every corner of Taiwan, and it continues to flourish. The number of practitioners has been continuously increasing. Falun Dafa practitioners can be seen not only in parks in the morning, but also in many government departments and colleges and universities. It is well-known that Falun Dafa can strengthen one's health and purify one's mind. The practice has gained high praise from Taiwanese government officials at different levels and extensive support from people from all walks of life.

On November 15, 2003, 10,000 people did the exercises in front of the President's Office as part of activities to support the lawsuit against Jiang Zemin 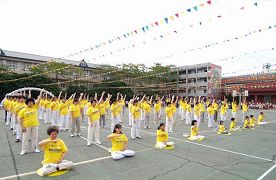 On May 13, 2006, 1,000 people did the exercises in front of Taipei City Hall to celebrate World Falun Dafa Day

On July 18, 2004, 1,500 practitioners formed the Chinese characters for "Fa Rectifies Heaven and Earth"

On May 15, 2005, about 3,500 practitioners formed the three Chinese characters for "Truthfulness-Compassion-Forbearance" and a Falun emblem, despite the rain, to celebrate World Falun Dafa Day

On December 25, 2005, 4,000 practitioners formed a Falun emblem to commemorate Falun Dafa's spread around the world

On May 13, 2007, 5,000 practitioners did the exercises in a big group at the Chung Cheng Memorial Hall square in Taipei City

On May 13, 2007, 5,000 practitioners formed the Chinese characters for "May 13, World Falun Dafa Day" to celebrate the 15th anniversary of Falun Dafa's public introduction

On December 1, 2007, about 4,000 practitioners gathered in Chunghsing New Village in Nantou County