The Mid-USA Falun Dafa Association was again invited to perform at the 75th Annual McDonald's Thanksgiving Parade in Chicago on November 27, 2008. They were the only Chinese group in the parade. Falun Gong practitioners decorated a large float to promote the Divine Performing Arts New Year shows, which will be held on December 27 and 28 in Chicago. More than 400 thousand people watched the parade. 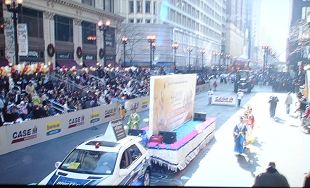 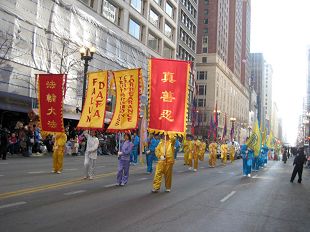 Practitioners' Tang-Flag Team during the parade 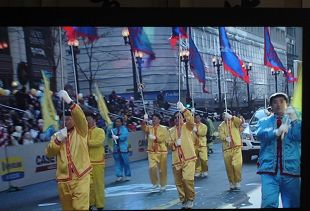 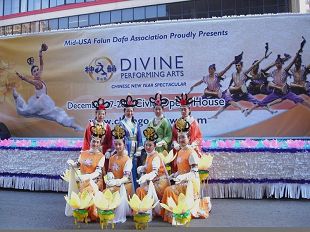 The annual McDonald's Thanksgiving Parade is one of the biggest parades in the mid-USA area. Falun Gong practitioners have participated in this parade since 2003. This year, the Falun Gong entry was led by the Tang-Flag Team, and also consisted of a celestial maidens' dance group and a float promoting the Divine Performing Arts shows.

WGN TV Station broadcast the parade, and almost one million families watched it on TV. Twenty-five bands from ten other states, including Texas, Minnesota, Ohio and Michigan, performed during the parade.

“Everything Is Magnificent During the Process of Validating Dafa”