(Clearwisdom.net) Tianti Bookstore, which sells only Falun Dafa related books and videos, is now celebrating its one year anniversary. Manager Mr. Zhu said that the Tianti Bookstore opened for business on November 2007 in New Jersey. On one hand, it provides convenience for practitioners to purchase Falun Dafa original works and audio-visual materials, on the other hand, it also provides those who are interested in Falun Gong with a positive channel to come to understand what Falun Gong is all about. 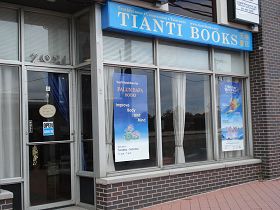 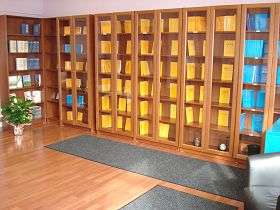 Tianti Bookstore has been open for business for one year in New Jersey, United States

The book Zhuan Falun was among the top ten bestsellers in China in 1997. But since the Chinese Communist Party (CCP) started the persecution of Falun Gong in July 1999, the publication of the book has been prohibited in China and a large number of books has been destroyed. So people in China are unable to purchase the Falun Dafa books that were widely available in the past. In addition, many bookstores run by Chinese people outside China dare not sell Falun Gong books under pressure from Chinese embassies and consulates.

Mr. Zhu said that since the persecution started, the CCP's slanderous and vilifying propaganda against Falun Gong has misled many of the world's people. Practitioners have held numerous activities to raise awareness of the persecution in efforts to bring it to an end. As a result, many people have heard about Falun Gong, but only have a vague idea of what it is all about. The Tianti Bookstore provides Falun Gong books in over a dozen languages, including Chinese, English, German, Japanese, French and Italian, and nearly 300 audio-visual products.

An "unusual" young lady: It is what I have been looking for

A young lady named Cynthia is in her 20s. She said she could see some scenes and things in other dimensions since her childhood. When she talked about them, her family and friends could not understand her, so she also began to suspect that something was wrong with her.

Cynthia and her three friends grew up in a community with a poor social atmosphere where violent incidents often occurred. She and her friends have been pondering what they should learn to change this violent society, but they had no answer. Several months ago, Cynthia prayed and pleaded with heaven: "God, can you tell me, what should I learn?" the following day, she found at her front door a flyer introducing Falun Gong. She opened the flyer, and felt all the cells in her body shaking. She could not help but burst out, "This is what I have been looking for!"

Cynthia went to a nearby practice site, and then found the Tianti Bookstore, located in northwest New Jersey. She bought the English version Zhuan Falun and exercise instruction video tape. Now she and four other friends have started to cultivate Falun Gong. The more they read Zhuan Falun, the more they love reading it. Through reading Zhuan Falun, Cynthia also understands many puzzles she had about life before. She is very grateful that someone placed the Falun Gong flyer at her front door.

A Chinese professor: If the CCP says it's bad, it must be something good. I must find out more about it

A Chinese biologist from Colorado has had six heart operations. He met many people at a local Chinese church who often sing the praises of the CCP. The professor asked them, "If the CCP is so good, why don't you go back to China?"

Once, one of them brought a copy of Zhuan Falun. The professor asked to borrow it, but they did not let him, saying that the CCP said the book is "not good." This biologist thought that what the CCP claims to be bad, must be something good. He made up his mind to find the book.

So the biologist checked the website and found the contact number of the Tianti Bookstore. He asked staff of the bookstore many facts about Falun Gong and finally he bought a copy of Zhuan Falun and the exercise instruction video tape.

Tianti Bookstore is a powerful source of truth

Though the city where the bookstore is located is not a tourist site, on some occasions, some Chinese tourists would come through. When they saw the Tianti Bookstore, many of them stood outside to take a look first, and then entered to look around. Some people were amazed and said, "There is a bookstore exclusively selling Falun Gong books!"

The bookstore manager, Mr. Zhu, said that the bookstore is a powerful source of truth. When people see it, they immediately realize it is different from what they have heard from the CCP's propaganda. The CCP's lies against Falun Gong are destroyed.

Tianti Bookstore is a non-profit organization registered in the United States. It shows from another angle that Falun Gong practitioners run the bookstore, following the principles of Truthfulness-Compassion-Forbearance. They provide a convenient place for people to purchase the Falun Gong books, and a channel for people to learn what Falun Gong is. They are not profit-oriented. They hope that through their efforts, many people will benefit from Falun Dafa cultivation, and from following Truthfulness-Compassion-Forbearance.

“Details Regarding Mr. Yang Jiaye's Death While in Custody in Guangxi Region”