Falun Dafa practitioner Ms. Qiu Yuxia was recently illegally sentenced to three years in prison by the Jiamusi Middle Court, and she is now imprisoned in the Heilongjiang Province Women's Prison. Ms. Qiu was arrested by the Jiamusi 610 Office and the Jiamusi City National Security Team on July 2, 2008, while she was hiring a lawyer to make an appeal for her imprisoned daughter Ms. Ma Duo, who is also a practitioner. Ms. Qiu Yuxia is being tortured during her incarceration.

On May 23, during the Jiamusi Middle Court trial, Ms. Ma Duo was sentenced to three years imprisonment in Heilongjiang Province Women's Prison. 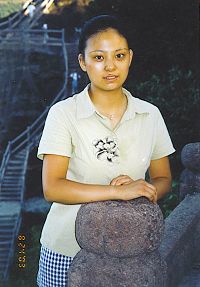 Ms. Ma Duo persists in practicing Falun Gong and thus has been a victim of persecution perpetrated by local officials of the Chinese Communist Party (CCP).

Ms. Qiu was also imprisoned in the Jiamusi City Forced Labor Camp for three years, since November 20, 2000, and the guards tried to force practitioners to give up their beliefs. She was hung above the ground with her hands cuffed behind her back. As a result of this torture, she lost feeling in her hands. She could no longer care for herself and was almost permanently disabled.

Ms. Qiu was arrested while she was at home, at around 6:50 a.m. on December 13, 2007. At around the same time, her daughter was also seized by police from her workplace, the Jiamusi Mobile Communications Company. At around 3.00 p.m., Ms. Qiu and her daughter Ms. Ma were both transferred to the detention center.

On January 14, 2008, Ms. Qiu's family was told that the 610 Office planned to arrest Ms. Ma again and give her a heavy sentence. Ms. Qiu was forced to leave home to avoid arrest, but she had nowhere to stay. In order to help her daughter, Ms. Qiu wrote an open letter asking people to "help stop such crimes from occurring and to protect kindness." In the letter, she also described the torture she experienced in the detention center.

Ms. Ma was sentenced to three years in prison by the Jiamusi Suburban Court. Ms. Qiu and her family have appealed the verdict, and they hired an attorney from Beijing to defend Ms. Ma. Ms. Ma's friends and family went to the Jiamusi Middle Court with the attorney at around 11:00 a.m. on July 2, 2008.

They were trying to look for Song Peixia to deliver Ma Duo's personal records to her. Song Peixia said that she had no time in the morning and made them come back in the afternoon at 1:15 p.m. In the afternoon, Ms. Ma's attorney, her family, and friends returned to look for Song. They found that the Jiamusi City's National Security Team and its 610 Office member Chen Wanyou were there.

When they went to Song's office, Song was very rude and ordered them to leave, with only the attorney being allowed to stay. Ms. Ma Duo's family and friends had to wait outside. Song talked with the attorney for a while and then asked him to photocopy her personal records. She specifically asked him to go to a particular office in the building and nowhere else. Throughout the process, she was slowed down by deliberate delays, and they forced the attorney to spend a large amount of time on minute technical issues. In the end, she took 20 yuan worth of photocopying fees and refused to give a receipt.

Throughout this process, Chen Wanyou was making calls on his cell phone. He called more people who were involved in the persecution. Song also made calls until 3:00 p.m. and said that they should leave.

As they approached the gate, they realized that it was surrounded by many policemen. Liu Yan, head of the Jiamusi 610 Office, brought his squad, including Wang Fujin, Yin Zuqiang, Yu Zhiyong, Lou Jiangling, and others. People from the Jiamusi Public Security Bureau, Qianjin Division Bureau, Yonghe Detention Center, Jiamusi Rural Division Bureau, and Changhong Detention Center were all present.

The policemen grabbed the attorney's arms and attempted to take him away. The attorney warned them not to, so they forcibly took him to an isolated room in the building. At the same time, Ms. Ma's family and friends were forcibly taken to the Changhong Detention Center.

An older lady, who was a witness to this incident, was also taken to the Changhong Detention Center by the police. After more than two hours, the attorney was allowed to leave.

Before this happened, at approximately 2:30 p.m., Chen Wanyou and four other policemen had already detained Ms. Qiu, who was waiting for the attorney at the Jiamusi Central Hospital. They also detained three of her friends and brought them to the Changhong Detention Center. Ms. Qiu and a friend were handcuffed there.

Her family and friends hired a lawyer to make an appeal for the second trial in the Jiamusi Middle Court. The Jiamusi Middle Court however, didn't inform the lawyer of the trial date, and the court upheld the original sentence without the lawyer, Ms. Qiu's family, or her friends present. Ms. Ma was then taken to the Women's Prison in Heilongjiang Province.

Ms. Qiu has been sentenced to three years imprisonment, and her family was not notified. She is to be sent to the Women's Prison of Heilongjiang Province soon.

Ms. Qiu Yuxia's younger sister, Ms. Qiu Yufen, was also arrested when she went to the courthouse with her sister and the attorney. Later, her family was ordered to pay 1,000 yuan, and she was forced to sign the fabricated documents in order to be released. Six days later however, Ms. Qiu Yufen was taken from her workplace, the No. 1 Hospital affiliated with Jiamusi University. The authorities seized her under the pretext that they "needed to talk to her." It was clear that the Jiamusi Rural Division Bureau and the security section, where she was working, were all involved in her arrest.

In this case, a total of six Falun Gong practitioners were illegally arrested, including Xiang Xiaobuo, Cai Rong, Qu Yujie, Qiu Yufen, Zhao Wenjie and Tian Hongying. They are now being held in the Jiamusi Detention Center. Currently, practitioner Mr. Zhao Wenjie has very high blood pressure due being brutally tortured. He was released after he paid over 10,000 yuan to the detention center. The other practitioners are still detained, however.

We appeal to all kind-hearted people all over the world to call for justice and help stop the persecution of these innocent citizens.