(Clearwisdom.net) On November 22, 2008, Thanksgiving parades were held simultaneously in Silver Spring and Baltimore, two Maryland cities not far from Washington DC, the capital of the United States. Falun Gong practitioners were invited to participate in both parades. The practitioners' contingent was composed of a float on which practitioners demonstrated the Falun Gong exercises, dragon dance group and waist drum group. Their performance was warmly received by spectators along the parade route. The biggest local newspaper Baltimore Sun made a special report on the practitioners' participation. 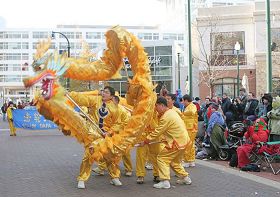 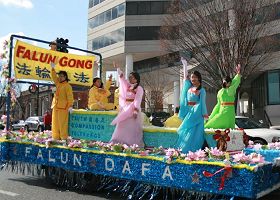 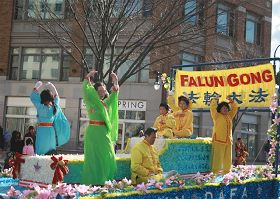 In Silver Spring, Minghui School students in golden exercise suits joined adult practitioners to demonstrate the exercises on the float. Spectators on both sides of the road were impressed. Some people imitated the practitioners' movements, and many people took photos of them. The dragon dancers added to the joy of the festival. 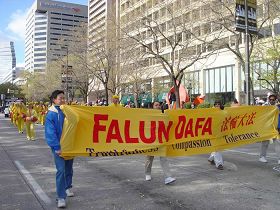 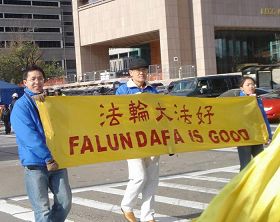 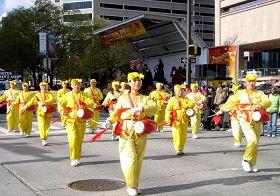 Practitioners marching in the parade in Baltimore, Maryland

Concurrently, Baltimore, the biggest harbor city of Maryland, also held the annual Thanksgiving Parade. Over a hundred entrants participated in the parade.

The Falun Gong waist drummers were a highlight in this year's parade. They were welcomed by spectators along the route. The biggest local newspaper The Baltimore Sun made a special report on it. 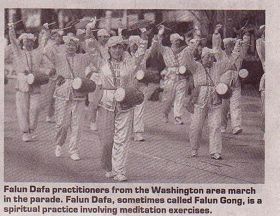 made a report on Falun Gong parade entry

“Practitioners in a Rural Area Walk Their Cultivation Paths Diligently”