On November 15, 2008, Falun Gong practitioners from Arizona and Los Angeles took part in an annual parade in Gilbert, Arizona. Falun Gong was the only Chinese group in the parade. 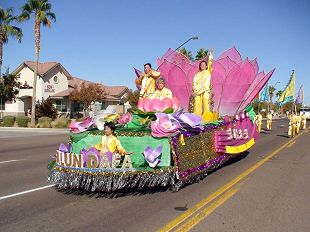 The parade started at 9:00 in the morning. Before the parade, the practitioners' beautiful float attracted many people, and some came to ask questions. During the two-mile long parade, practitioners demonstrated the exercises on the float. There were introduction stages along the parade route every quarter mile. The organizers introduced Falun Gong to the spectators as an ancient Chinese cultivation system, with practitioners following the principles of Truthfulness-Compassion-Forbearance.

Many people praised the float and exercise demonstrations, and many took photos. Practitioners took the opportunity to clarify the truth about Falun Dafa and the persecution to people.

“Discovering Our Shortcomings Through a Fa Conference and Improving Together (Photo)”