Discovering Our Shortcomings Through a Fa Conference and Improving Together (Photo)

On November 16, 2008, practitioners held the "2008 European Falun Dafa Cultivation Experience Sharing Conference" in Berlin. More than one thousand practitioners from various countries in Europe attended. Many of them expressed the same sense, that the sharing was moving. When they heard Master's message to the conference, they were beset with welling emotions. Practitioners who listened to Master lecturing on the Fa ten years ago in Frankfurt also recalled their cultivation experiences, from the time of personal cultivation to Fa-rectification cultivation. 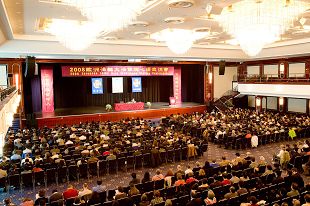 Mr. Wu, a member of the European Falun Dafa Association, told reporters, "Ten years ago we were all beginners in cultivation. At that time we thought cultivation meant that we should conduct ourselves as good people. When others criticized us, if the criticism was reasonable, then we would listen. If not, we would just ignore them. Ten years down the track, I found that many practitioners have become more mature in their understanding of the Fa principles. We understand that when others criticize us, even if they are wrong, we should still listen, because for cultivators, nothing happens by accident. This is a big change. Ten years ago, we were at the level of personal cultivation. Later, when the evil Chinese Communist Party (CCP) started persecuting Falun Gong, we entered the stage of Fa-rectification cultivation. I could clearly feel that practitioners had a very strong sense of validating the Fa, and everyone held a sense of mission to save people. The verses from Master's poetry (Hong Yin II) that are displayed at our conference express our current state of mind: "Mercy can melt heaven and earth into spring; Righteous thoughts can save people of the world."

"I remember more than 900 people from 25 countries listened to Master giving a Fa lecture at the Frankfurt Fa Conference. When Master walked into the conference hall, he looked at us with a smile on his face and was very happy. Master said that he had attended a few Fa conferences and had not seen any of them with so many Western practitioners in attendance." Mr. Wu continued, "Looking back, many practitioners, including myself, then still had a very limited understanding of Dafa. Ten years further on, many of the practitioners who attended the conference are still steadfast cultivators, as has become evident. This time, about 1,100 practitioners came to attend the Fa conference, many of them from far-away places such as Russia and Ukraine. Two practitioners from the Ukraine drove 23 hours to attend the conference, taking turns driving. It is quite extraordinary, and, it is also not always easy to take leave from work."

Mr. Aleardo from Sweden said, "This Fa conference is moving and inspiring at various levels. I remember the Fa conference in Frankfurt ten years ago. The persecution had not yet happened then. Today, after all these years, maybe my xinxing has risen and the environment has also changed. I was moved to tears by the experience sharing. I feel we have not thought seriously about ourselves. I shall see what I can do in the future. It is so wonderful to be here today."

Pirio from Sweden attended the 9-day Fa lectures by Falun Gong founder Mr. Li Hongzhi in Sweden. She said to reporters, "Today's Fa conference is very special. It has been ten years since Master came to Germany to teach the Fa. I was especially touched when we received the message from Master today. I feel that Dafa disciples have become more mature and have learned much from what they have been through. Today, a practitioner from Mainland China talked about his cultivation experience and the persecution he had suffered in China, including unlawful imprisonment and torture, which made me feel sad whenever I think of China. I live in Sweden and started to practice Falun Gong in 1995. However, such a wonderful practice is still being persecuted in China, and people have died as a result of the persecution. There are still so many Chinese people who do not know the facts." She went on to say, "Ten years ago my understanding was that Master hoped that people in Europe could understand that he was our Master. Today, Master has written to us, encouraging us to move forward and to be even stronger, and to do our best to offer people salvation. I think everyone has heard wonderful cultivation stories today, and we have had tremendous insights. We must find our shortcomings, reduce our gaps and become even stronger in order to rescue more people. Sorry, I can't help crying."

Mr. Yang from Belgium said, "This is my first time attending a Fa conference. I feel I have changed much in Dafa cultivation. Today we heard Master's message to us, and I can feel even more strongly the great compassion from Master and the hope he has in us. He hopes that we can improve and do better in saving sentient beings. I'm deeply touched by Master's compassion."

"My first impression of Master's message is that Master is very concerned about practitioners in Europe," said Bernhard from Germany, "Many practitioners have failed to do as well as what Master has requested of us. Master expects us to do better. Master needs to tell us this in serious words, because we do not have much time left. I can see that all of us at the conference are deeply touched and feel we have been too slow. Ten years ago when I first met Master I was deeply moved, to the point of tears. I knew everything he said was true. He was so calm, so compassionate and did not show any sign of being hard. He is a great Master! I was deeply touched at the time and I knew Dafa was very special. I had not quite started cultivation then. After I met Master, I understood that what Master said was 100% right. I was filled with deep feelings and felt very happy. My whole body was warm, and I was in tears. I didn't know what happened in other dimensions, but I felt very special. Maybe my knowing side felt something, and that was why I couldn't hold back the tears." About this Fa conference Bernhard said, "Many practitioners came today, I feel this is really good. I think the sharing is very good. A sharing from Sweden touched me deeply. During the practitioner's time of being in charge of coordination work for the Divine Performing Arts show, she thought she was important and very kind but was simply unable to cooperate well with other practitioners. She used a metaphor and said that if each organ of an ox believed it was important and did not cooperate with other organs then the ox would almost die. This helped me see how important it is for us to cooperate well. She realized how her attachments had tied her up, and the importance of looking inward."

Stetana from the Ukraine has practiced cultivation for six years. She said, "The conference was very well organized. I could particularly relate to the Swedish practitioners' experience sharing, because we have had similar experiences. I'm also very happy that the Divine Performing Arts can go to the Ukraine, as it can also provide an opportunity to help us improve our xinxing and catch up in those areas where we have not done well in our cultivation. Master's words make me feel that time is very pressing at the moment. We must try our best to rescue more people. It's a pity that only two practitioners from the Ukraine made it to the Fa conference this time, but others could not obtain visas."

Anatoly from Latvia felt great during the conference and stated, "I was especially happy that Master sent us a message. Twenty-five of us came to the conference. We drove 24 hours to get here. I started practicing Falun Gong in 1998. For years I always wanted to be more diligent, but was unable. Looking back at my cultivation, I have lost many opportunities to rescue people and to improve myself. While cultivating sometimes I felt happy, sometimes sad, and I have not done well."

Another practitioner, Anlrey said, "I need to immediately reduce the gaps between me and others. I must wake up."

Ms. Cai, who lives in Germany, said with emotion, "I feel as if every word Master said is directed at me. I have just looked inward and sense, compared to other practitioners, that I have done poorly here and there. When I take a deeper look to see exactly where I fell short I found my problem to be a lack of wholehearted faith in Master and Dafa. There is nothing else to say. When I get back I shall just do well, because cultivation depends on oneself, and the gong depends on Master. As soon as I heard Master's message, I felt that Master was talking about me."

Helga from Austria said, "Master was talking about me. While I listened to Master's letter I was looking at Master's photo. It felt as if Master spoke directly to me. Master was alive in the photo, like a real person. I was deeply touched. For me, this conference is the most important of all the Fa conferences I have attended to date."

"There are two things that especially touched me at this conference," Ms. Yang from Berlin said, "One is that I could calmly listen to sharing from all practitioners, be they practitioners whom I think are diligent or new practitioners. I can listen calmly to all their sharing without judging them with my own notions. Another thing is that their sharing might not have addressed things relevant to my problems, but I could think about my problems. This experience is different from how I felt when I attended Fa conferences in the past. I could also feel strong support from Master. From the very beginning, Master has been strengthening the whole field of the conference. I can also feel Master's expectations and that Master feels that we practitioners living in Europe could have done better.

"Some sharing reports at this conference were extremely moving. We could feel that Master would say something to us, even before the practitioners started their sharing. Before they started, a few practitioners around me, and myself, were already in tears. Master's message is very short, but I feel it refers to the state of practitioners living in Europe as a whole, especially those who were less than diligent in the past. Practitioners around me, including myself, sense our lack of diligence for a while, so we are truly deeply moved."

“Ms. Wu Di Dies as a Result of Persecution in Jiangsu Province”