After Traveling Far and Wide, a PhD Student Obtains the Fa (Photo)

Mr. Huang Qiyu started practicing Falun Dafa as a PhD student in Taiwan. By studying the teachings of Falun Dafa, he found answers to many questions that had troubled him for a long time. The principles of Truth-Compassion-Forbearance guided him to choose the right path when he reached a difficult time in his life. 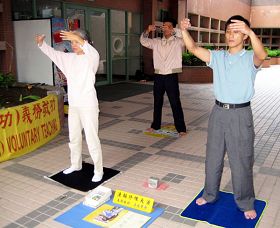 While Mr. Huang was a college sophomore, he injured his right foot playing soccer. On his way to the hospital, his car was involved in an accident, which made his foot problem worse. Though the hospital treatment seemed to help his right foot recover, the effect of the treatment left him with severe pain in other parts of his body. Back pain prevented him from being able to sit properly, and he was in constant pain every day. His mother was very concerned and looked everywhere for an effective remedy. He and his mother visited many well-known doctors in Taiwan, but to no effect. They then followed a neighbor's suggestion to practice qigong. He began to feel a little bit better and became curious about the various forms of qigong.

At the beginning of 2000, during his winter break at university, Mr. Huang and his friends visited San Francisco. While they were at a Chinese restaurant, the owner told him that he was a Falun Gong practitioner. The owner of the restaurant gave Mr. Huang his business card, which had the Minghui website address on it.

When Mr. Huang returned to Taiwan, he bought the book Zhuan Falun to read. He said, "After reading a few lines on the first page, I was stunned. I especially enjoyed reading the first section, 'Truly Guiding People Up to High Levels.' I felt the answers to all my doubts were answered in this book. The more I read, the deeper I was touched. Though I only read a few pages at first, I felt that it was what I had been waiting for my whole life."

When he found out that there were more materials for him to read, including Essentials for Further Advancement and Master's lectures from other places, he found and read all of them.

After studying the Fa and practicing Falun Gong, Mr. Huang's life changed dramatically. The pain that used to bother him disappeared. His attachment to being competitive gradually abated, and his eyesight got better.

Mr. Huang decided that he wanted to validate the Fa through his research, and on May 15 and 16, 2004, his opportunity arrived with the International Future Science and Culture Conference held at the Aggregation Scientific Research Center in Taiwan National University. Professors and scholars from the U.S., Japan, Australia and Taiwan attended the conference, and more than ten Falun Gong practitioners were invited to present lectures there. Mr. Huang and Kai Xiong, another practitioner, selected hallucinatory limbs as their research topic, which mainly focused on amputees who still had feelings of pain, numbness and itching. As the patients had limited mobility, most of them had care workers to help them, so during his research, Mr. Huang took the chance to tell all of them about Falun Gong.