(Clearwisdom.net) Ms. Ni Liling was one week from her surgery for hyperostosis when she ran into a group of Falun Gong practitioners in a park one morning. She was suffering tremendously from the bone disease. She was not able to sleep for more than four hours without having to sit up to ease the pain. Then within an hour, she started to feel pain again. She had tried many doctors and treatments in vain. That was when she decided to have surgery, although she was aware of others who became paralyzed when the surgery was unsuccessful. 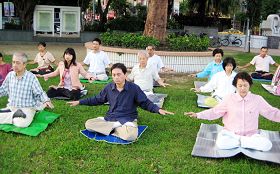 Ms. Ni (first from right) went to a park to do the exercises every morning

Ms. Ni (third from right in front row) practices the exercises every morning

Ms. Ni was walking in Ren'ai park in her hometown of Yonghe City, Taiwan, one morning when she saw several Falun Gong practitioners doing the exercises. The graceful movements drew her in, and she began practicing along with the practitioners. Mr. Jiang Peihao, a local assistant at the practice site, taught Ms. Ni the exercises.

As Ms. Ni did the exercises, her body felt very light. Within a few days, when she did the second exercise, she felt the Falun turning rapidly. A week went by, and she canceled her hyperostosis operation. She said, "I read Zhuan Falun and went to the nine-day lecture series. I did the exercises everyday. Before I knew it, my back problem disappeared."

All this happened eight years ago. When she first began practicing, although she was diligent in doing the standing exercises, she did not have much enthusiasm for studying the Fa or sitting in meditation. She said, "I didn't understand cultivation at all. It wasn't until the next year when I went to Washington DC and listened to Master's speech did I realize the need to strive forward." She recalled that as soon as she walked in the conference hall, she felt the Falun turning. It was turning so quickly that she could hardly sit down; she thought an earthquake was happening. Then she heard Master's lecture and remembered the passage about Falun turning in the body. She suddenly understood. She said, "Although I was sitting on the third level, and Master was far away, I felt a sense of wonder. All day, I could not stop my tears. That was when I understood how to cultivate Truth-Compassion-Forbearance."

Praise from Her Mother-in-Law

Ms. Ni said that before she started practicing Falun Gong, she did not want to say "hi" to her neighbors. Even when her neighbors greeted her, she would avoid them or make excuses to not talk to them. Since she began practicing, she realized that this was against the principle of "Truthfulness." She decided to be honest and not lie again. Before she practiced Falun Gong, she also had a bad temperament, and cared very much about money. She sometimes would take advantage of others. When going shopping with her mother-in-law, she often asked her mother-in-law to pay and did not feel guilty. After she started cultivating, she became considerate of others and often paid for her mother-in-law's expenses even though she was not rich herself. Her relationship with her mother-in-law greatly improved. About a year after she started practicing, Ms. Ni's husband told her that her mother-in-law commented on how nice a person she had become. Ms. Ni's husband, daughter, son-in-law, and his whole family all became Falun Gong practitioners.

Ms. Ni's husband, Mr. Ni, had diabetes. It was getting worse, and medicine did not help. He had also been a smoker for several decades and could not quit. Initially, he was skeptical about cultivation. However, after witnessing the amazing changes in his wife and daughter since they began practicing Falun Gong, Mr. Ni also began practicing. Ms. Ni said, "When he was listening to the nine-day lecture series and heard lecture seven about quitting smoking, the very next day, he stopped smoking. His addiction was gone. His diabetes also disappeared."

Ms. Ni said she felt Master's care every moment during cultivation. She said once she she was riding a scooter home after midnight when she was hit by a fast-moving bicycle. The momentum was so great that she was thrown in the air and landed on the ground. Then the scooter crashed into her body. Even her MP3 player was smashed. Ms. Ni said, "My whole body was aching, but I kept telling myself, 'It's OK.' I slowly got up from the ground, helped the other person get up and asked him if he was OK. He was really shocked. He thought he had caused a serious accident, and said, 'It's unthinkable that you can still get up, and you were asking me how I was doing.'"

When Ms. Ni got home, she didn't want to wake up her family members and went quietly to bed. The next morning, she saw that there were many bruises on her body and her skin was scraped in many places around her wrists and knees. She didn't take it too seriously and just did everything as usual, including studying the Fa and doing the exercises. Within a week, everything healed, as though the accident never happened. Ms. Ni said, "It doesn't sound that significant; I know many Dafa practitioners have similar experiences. I know the importance of studying the Fa. Besides studying the Fa by myself, as long as time allows, I try to join fellow practitioners in group study sites everyday. This allows us to share with each other and improve our understanding. I also try to be at the morning practice site every day. That was how I came into contact with Falun Gong. My understanding is that it's also a part of my path to validate the Fa. Besides benefiting from it myself, I also hope others can be as fortunate as I am and become Falun Dafa cultivators."

“Walking Out of Tribulations”