(Clearwisdom.net) On October 1, people from all walks of life in Sydney Australia held a rally to condemn the Chinese Communist Party's (CCP) brutality and support the 43 million Chinese people who have renounced the CCP. 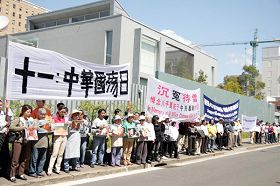 Dr. Lu Zhenlei, the chair of the Australian Service Center for Quitting the Party, gave a speech in which he reviewed the bloody history of the CCP and condemned the persecution of Falun Gong. He called for people to quit the party.

Dr. Li Yuanhua, a former teacher at Beijing Normal University, pointed out that the poisoned milk product scandals show that what the CCP cares about is money, not people.

Ms. Wang, a volunteer from the service center, stated that the CCP ruined the traditional Chinese culture. She called upon people to recognize the evil nature of the CCP and restore this great culture.