France: Members of the European Parliament call for Eutelsat to Resume NTDTV Broadcasts into China (Photo) 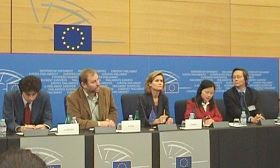 Helga Trupel, MEP from Germany, said, "For Chinese people, It is very important to resume the signal of the NTDTV because it allows Chinese people to learn the truth about things such as the tainted milk scandal."

She pointed out that EU institutions, in particular president Sarkozy, have the duty to urge Eutelsat to restore NTDTV broadcasts because "according to the information we have, it is not a technical problem but pressure from the Chinese Communist Party (the CCP) regime which led to NTDTV's signal being stopped before the Olympic Games".

Ms. Trupel stressed that freedom of the press and human rights are universal values, and that members of the European Parliament have the duty to defend them. Marco Cappato, an MEP from Italy said that in his double positions both as a co-coordinator from the Liberal Democratic Union and a member of the Human Rights Committee in the European Parliament, he gave his support in the motion calling to resume the signal of NTDTV and encouraged other MEPs to sign it. The EU and its member states should take a strong, firm and clear position so that NTDTV broadcasts into China will resume.

The EU should stand up to pressure from the CCP

Manyan Ng, the director of the International Association of Human Rights (IFGM), the largest human rights organisation in Germany, pointed out that "because of the control of the media by the CCP authorities, including incidents such as SARS, the persecution of Falun Gong and the recent "poisonous milk powder", all these have developed to such a serious extent that should not have to. I sincerely hope that the EU can stand up to the pressure from the CCP this time."

The EU should investigate this matter

Ms. Zhou, from NTDTV Europe said, "Today, I feel sad because normally I am a reporter, gathering news about the activities of the Parliament when I sit among you. In fact, our TV station is the only one that helps the Chinese people to learn what is happening in the European Parliament."

Ms. Zhou urged the EU and the French government to take actions against Eutelsat and have it resume broadcasting NTDTV into China "because it is not only to report something about the European Parliament, but more important is that NTDTV has been reporting serious issues related to China. For example, the recent poisonous milk powder incident. In addition, NTDTV learned that a week before the Olympic Games, the former Chinese Director General in Food Production Supervision Department of State General Administration for Quality Inspection had committed suicide, closely related to the food quality scandal.

Ms. Zhou requested Eutelsat to give a detailed technical explanation about breaking the NTDTV signal. She also thought that the EU should investigate the reason behind this matter. If Eutelsat has received some benefits from the EU economically, the money should not have gone into the hands of those who suppress freedom in news and have put Chinese people's lives in danger.