(Clearwisdom.net) Falun Gong practitioners Liu Jinglu and Sun Lixiang, from Mishan City, Heilongjiang Province, were arrested and detained for more than three months. They are currently illegally detained at the No. 1 Detention Center in Jixi City. Their six-and-a-half year-old son was waiting at home for his parents to return. The regime personnel has control over the Procuratorate of Jiguan District, Jixi City, and planned to illegally try the couple. 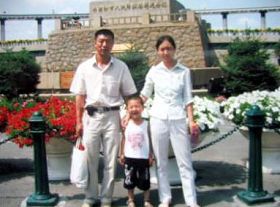 Mr. Liu Jinglu, 39, was formerly employed at the Shuili Concrete Manufacturing Company in Mishan City. He lived in one of the buildings at the GYM of Mishan City, Heilongjian Province.

After learning Falun Dafa in 1998, Mr. Liu quit his bad habits of smoking and drinking. His serious gastric ulcer was quickly healed without treatment, and he became a kindhearted person. Mr. Liu's wife, 39, unemployed, started practicing Falun Gong in 1996. She recovered from internal bleeding in her womb and is now completely healthy.

On the evening of June 2, 2008, Mr. Liu drove to Taiping Village with his wife, and they were subsequently reported to the police and arrested. On the morning of June 3, Mishan City National Security Team officers Wang Yaoguang, Li Gang, Gao Shitong, and others came to Mr. Liu's home. Officer Li Gang and others went to his garage first, while Gao Shitong went to Liu's living room and illegally ransacked the house. Mr. Liu's daughter asked the police, "What is the reason behind arresting my parents? What crime have they committed? You know most clearly what you have done. Why do you do everything for money?" They all lowered their heads and said nothing.

The stationery that Mr. Jinglu Liu had designed, with unsparing efforts for many years, were confiscated by the regime personnel. The parties who participated in the illegal ransacking were the No. 2 Police Station in Mishan City, Mishan City National Security Team, Jixi City National Security Team, and Jixi City 610 Office. The stolen property included two laptop computers, two computers, two printers, a paper cutting machine and US$3,000 cash. They also took the couple's car, which was worth about 300,000 yuan. The No. 2 Police Station changed the license plate and used it for their fleet. One police officer forcibly took a savings certificate from Mr. Liu's daughter, which had a value of 280,000 yuan on it. Liu Jinglu's daughter asked the officer, "Why did you take my family's saving book?" He replied, "If this savings book has your name on it, then I will give it to you. If it has your father's name, we must investigate to see if this money was sent here from outside of China by Falun Gong to pay him to do these things." The police inventoried other property on the premises. The stolen US$3,000 was not recorded. All told, a value of more than 800,000 yuan, including property and money, were taken without receipts. The police also video-taped all of Mr. Liu Jinglu's privately-owned houses.

On the evening of June 3, Mr. Liu and his wife were both illegally taken to Jixi City, and detained at the No. 2 Detention Center. Sometime in August, they were transferred to the No. 1 Detention Center in Jixi City. In mid-June, personnel from Jixi City National Security Team asked Mr. Liu's daughter to sign a "notice of detention." However, the notice indicated that they were arrested on June 4. The detention notice provided by Mishan City National Security however, stated that they were arrested on June 3 at four o'clock.

The couple's detention has affected many family members. Mr. Liu's daughter now takes her six-and-a-half-year-old brother to a relative's home to eat. As a result, a police car was stationed there on the second day. The family has also received a number of anonymous harassing phone calls. On one occasion, Mr. Liu's daughter went to Jixi City to pick up a letter from her mother delivered by an unknown source. Before she even read it, a woman took the letter from her. The police must have been monitoring the children's telephone calls, and following Mr. Liu's daughter every day.

We have recently learned that this case will be sent to the Procuratorate of Jiguan District, Jixi City, on September 19. The Procuratorate never investigated whether Mr. Liu Jinglu had truly violated the law, yet they still intend to push this unjust case through the court. The family has hired a lawyer for the couple.

“How to View a Child's Schoolwork”