On October 18, sponsored by the Ministry of Interior Affairs and the National Fire Agency, the 7th Taiwan Firefighters Athletic Competition was held in Tainan. The Divine Land Marching band, composed entirely of Falun Gong practitioners, was invited to perform. Their performance was very well received. 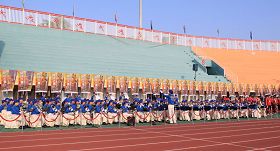 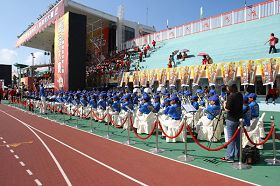 Mr. Ming-Fang Wu, director of the Tainan Fire Agency, was impressed by the performance of the band when he attended the Taiwan Area Games last year, and thus decided to invite the band to lead the opening ceremony for this competition.

Tainan Mayor Tain-Tsair Hsu commended the performance of the band: "The Divine Land Marching Band is really an unexpected gift to us."

During the opening ceremony, the MC gave a brief introduction of the Divine Land Marching Band, explaining that the band was formed only 2 years ago and included musicians of all ages. Amazingly, many of them didn't know how to play any instruments when they first joined the band. Because they all practice the principles of "Truthfulness-Compassion-Forbearance" and they simply want to show people the beauty of Falun Dafa, they worked very hard and managed to perform very well now.

Xiu-xiu Gao is a schoolteacher who has been in charge of organizing large sports events in Tainan over the past several years. Four years ago, in a sports awards ceremony, she saw 1,000 practitioners peacefully meditated in the baking sun and she was deeply moved. For this reason, she invited the Divine Land Marching Band to the Taiwan Area Games last year. "The Divine Land Marching Band is a very energetic, disciplined and coordinated group," said Ms. Gao.

In the past several years, the Taiwan Divine Land Marching Band has been invited to many large-scale ceremonies in Southeast Asia. Currently, the band, with more than 500 members, is the largest one of its kind in Taiwan.