(Clearwisdom.net) Falun Gong practitioners held activities in the centre of Helsinki, Finland on October 4th. They did so to raise awareness about Falun Gong and to call on the people of Finland to reach out and help stop the persecution in China. Practitioners displayed information boards, demonstrated the Falun Gong exercises, and handed out flyers. They also collected signatures on a petition condemning the persecution. 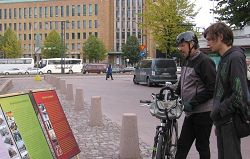 People stop to read the posters 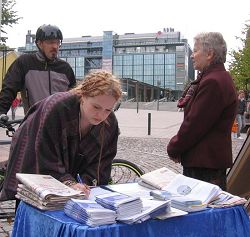 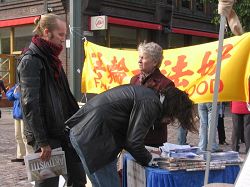 People learn about the persecution.

Falun Gong is not unfamiliar to many people here, as practitioners have been holding similar events for many years. The kind people of Finland offer a helping hand to Falun Gong practitioners in many ways.

A man requested more materials, saying that his daughter is an editor for a newspaper, and that he wanted to give his daughter the materials in the hope that she could help Falun Gong.

A woman named Petra told a practitioner that she had heard about the persecution, so she came to sign her name in support.

A man passing on his bicycle stopped and asked for materials. He said that he had heard about Falun Gong and wanted to learn more. A practitioner told him how she had benefited in mind and body from starting to practice cultivation in Falun Gong in 1995, and went on to explain that in 1999 the CCP started to suppress these good people who believe in Truth-Compassion-Forbearance. She herself came to Finland in 2001 to see her daughter, and three months later when the time came to return home, her friends and family in China told her not to come back. The national police had gone to where she worked and to her home to investigate, and even threatened her more than 80 year old mother. Her mother passed away last year, but she was unable to go back to pay her last respects. Mrs. Jiang gave the young man direction to the Falun Gong web sites, telling him that he could read the Falun Gong books there. He inquired about the practice sites in Helsinki and then said, "It looks like the CCP fears Falun Gong."