The Toronto Divine Land Marching Band, composed of Falun Gong practitioners, participated in the Oktoberfest Thanksgiving Day Parade held on October 13, 2008 in Waterloo, Ontario, Canada. Their performance received a favorable review from the organizer and spectators.

The Kitchener-Waterloo region, located about 100 km west of Toronto, is the largest popular destination for German immigrants in North America. Of the population of more than 400,000, most of are Bavarian. Before Thanksgiving in October every year, a grand Oktoberfest is held here, in Bavarian style, featuring drinking beer, folk dances, concerts and a large scale Thanksgiving Day parade. They draw nearly a million visitors from all over the world.

It is the second year that the Toronto Divine Land Marching Band participated in the parade in their new costumes. Their performance was warmly received by spectators along the parade route. 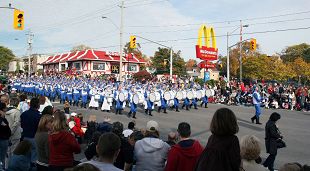 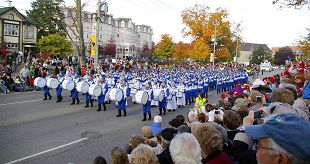 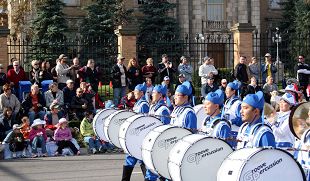 Ms. Liu came to Canada from Shandong Province in China five months ago. When the Divine Land Marching Band passed by her, she was so excited that she waved to the band.

"I felt particularly warm as soon as I saw they were Chinese. It's the first time that I've seen this band. When they passed by, I could not help being very emotional," said Ms. Liu in tears, "I had been waiting and wondering why were there no Chinese people? As soon as I saw them, I burst into tears. They are so inspirational, bringing China's beautiful things to people here. I'm proud of them."

Ms. Liu's husband is a researcher at Waterloo University. He said, "The band is excellent, reflecting Chinese culture. They can promote Chinese culture overseas. I feel they are remarkable." 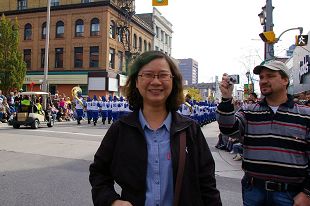 Ms. Chen is from Taipei. She is proud to see the grand Divine Land Marching Band

Ms. Chen, who is from Taipei, kept waving and applauding the band. She told the reporter, "It's really a different feeling seeing our compatriots in a foreign country. I just came from Taiwan not long ago. It's the first time that I have seen such a grand Chinese band. I'm very proud and happy. I thank them."

The parade's organizer said, "It's the biggest Thanksgiving Day Parade in Canada, very successful. There were new entrants in this year's parade, including bands from the United States. It was estimated that nearly 200,000 people watched the parade."

"Divine Land Marching Band is the only band from the Chinese community, and it's the best Chinese band. I like this band very much, their performance was full of enthusiasm. I'm looking forward to seeing them again next year." 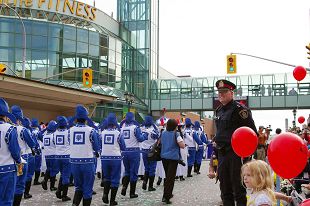 Police officer Dryan Larkin who kept order at the main stage watched the performance by the Divine Land Marching Band. He gave a thumbs-up and said, "Thank you!" 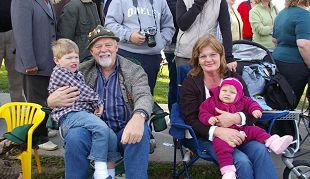 Bob and his family praise the Divine Land Marching Band

Bob and his family praised the band, "We did not expect to see a Chinese band. The women drummers were excellent, their costumes were also very nice. Their performance was fantastic. We are grateful for their coming to the Thanksgiving Day celebration."

The performance is very exciting

Joanne Langbein is a manager of a travel agency in Naperville, Illinois. She brought two tour groups of 98 tourists to the parade. They drove about 12 hours.

"It's a wonderful parade, there were many interesting things. The bands were terrific, and the floats were beautiful," said Langbein, "We came to the parade for the first time, and everybody is happy. The Divine Land Marching Band is the biggest band, and their performance was excellent. I like their costumes."

Two women from another tour group said, "We came from Pennsylvania, and this is the first time we rode a bus to watch the parade. The parade was nice, and people were very friendly, leaving us with a pleasant impression. Particularly the band whose members wore ancient Chinese costumes were very spectacular. Their performance was exciting."

The parade route was 7.2 km, and lasted for two and a half hours. Zhangling, who plays small saxophone in the Divine Land Marching Band said, "We performed all the way to the end of the parade. I was encouraged by people's joy when they saw us, I did not feel a bit of fatigue; conversely, I became more energetic the closer we came to the end."

Mr. Ren who plays bass tuba said, "Although bass tuba is in the bass section, it plays an important role in the process of the band's entire performance. It is very heavy to carry, but when I play it well at all times, it plays a very good role for the entire band performance. I'm honored to try my best to bring good things to so many people."