(Clearwisdom.net) On September 25, 2008, while the Shenzhou-7 spacecraft was still on the launchpad, Xinhua.net, the official news agency of the Communist regime, published an article entitled, "An Exciting Night on the Pacific: Shenzhou-7 Orbits 30 Times." It vividly described how the astronauts received signals when the spacecraft was making its thirtieth orbit of the earth. It even included conversation between the orbiting astronauts and the dispatcher. The only problem: the spacecraft hadn't even launched yet. 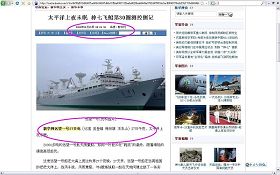 Screenshot of the fabricated article Xinhua Net published on September 25

Because the news was such nonsense, on September 26, Xinhua.net had to publish a short apology, for the first time in history. According to Xinhua's apology, "Our website published a draft article due to operational mistakes by our editors, for which we apologize."

Was it truly operational mistakes? Or just fabricated news? There have been many discussions about this on the Internet. Some came out to argue for Xinhua.net and said, "They needed to fight with time. News media always have to prepare the news even before the result is out. Getting the article ready ahead of time is totally normal."

Indeed, as a news reporter, the most important thing is to get the news out fast. Everyone knows that the basic requirement for a reporter is to gather sufficient background information and materials ahead of time. With these materials, reporters can be fully prepared for the interview, follow up with details of the events, and act quickly in response to any changing factors. Then, along with the background information, they can publish the news report immediately.

However, the article, "An Exciting Night on the Pacific: Shenzhou-7 Orbits 30 Times" is not at all a news piece that needs to race against time, and it contains no background information. It is a completely vivid "interview and detailed description of the experience." "Five minutes to prepare! Point antenna toward waiting area." "One minute to prepare!" "Suddenly, a bright line flashed across the screen, and a bright dot appeared." "Changjiang 1 has found the destination!" "Changjiang 1 has completed double capture!" "The dispatcher's firm voice broke the silence on the ship. At this point, they were 12 seconds ahead of schedule."... How could these conversations be draft scripts? What's more ridiculous is that the news reporter quoted the conversations between the astronauts in orbit and the ground dispatchers, but the astronauts were actually still on earth with the spacecraft still on the launchpad. It stated, "The astronaut said, 'Pressure valve, orbital complex has been reduced to 40 kPa, over,'" An obvious fabrication. The article even described, "The voices of the astronauts were as clear as could be."

We should not be surprised by these article-fabricating tactics by the Xinhua.net news reporters.

For the past nine years of the persecution of Falun Gong, the Xinhua News Agency and other regime media has been vanguard in producing lies and instilling hatred. The regime's numerous cases of slander, including the self-immolation, suicide stories, serial killings and more have all been exposed and proven to be CCP propaganda crafted to deceive the public.

Nonetheless, when Falun Gong practitioners expose these lies, some people evaluate the CCP based their own wishful thinking. They think that although the CCP has made up many lies throughout history, they may feel that the current regime is different. They don't believe that a national media source could publish fabricated news in this day and age.

Then, in the Xinhua.net article "An Exciting Night on the Pacific," the reporters made up so many fabricated details. It is truly a hint of how much the regime's mouthpieces fabricate news and events. This is truly a live and textbook example of made-up news.

If the CCP can fabricate news to showcase its "achievements," then regarding Falun Gong, under direct pressure from the CCP Central Committee in the smear campaign targeting Falun Gong, it's not hard to believe how much false propaganda is spread about Falun Gong.

Falun Gong practitioner Ms.Yuan Yuge from Renqiu City, Hebei Province once exposed that China's CCTV publicly distorted the truth and broadcast lies about her. CCTV reported, "Ms.Yuan Yuge went insane due to practicing Falun Gong and jumped into the Baima River together with her child." Ms.Yuan clarified this herself, "One day in 1998, on my way home from picking up my 10-year-old son from school, on a small bridge, to avoid slamming into the many students on the bridge, I jerked the wheel and slid down a hill. The bike I rode at the time was borrowed from an uncle in my village. Many people were present, including the doctor from Shihu Village, which is just several meters from the little bridge." However, an unscrupulous reporter disregarded journalistic ethics, distorted the facts, and fabricated and changed the previous interview clips. Ms. Yuan asked the reporter later why the interview clips were changed and the news fabricated. The reporter answered, "We were ordered to do it. If we didn't do it, we wouldn't get our bonus."

Why would the reporters do this? In the past, people didn't understand it, but today, after reading this fabricated news on Xinhua.net, people should realize what's going on.

When it was discovered that these reporters were writing fabricated news stories, were they ashamed? I don't believe they were, because the culture has come to accept this behavior. People wonder why China has been facing a credibility crisis, why there have been so many fake Chinese products, why people dare to contaminate baby formula with industrial chemicals, and why reporters from the Xinhua News Agency publicly fabricate news... Yes, so many whys. Which direction is the CCP taking the nation?

Morality is an abstract concept, but it is a most fundamental thing, reflected in every person in their daily lives. Fabricated news and toxic food are just things on the surface. The root cause is the poisoned and depraved morality of Chinese society inspired by the Communist Party. The poison both spiritually and physically has made the Chinese people's living space narrower and narrower. China should throw away the CCP and recover traditional morality. This has never been as important for the Chinese nation as it is now.