(Clearwisdom.net) In two performances of the Chinese New Year Spectacular in Philadelphia, performed by the Divine Performing Arts Company, audiences were moved by two dances which depicted the suffering and the spirit of Falun Gong practitioners in China. People applauded warmly when they saw that justice finally won over evil. 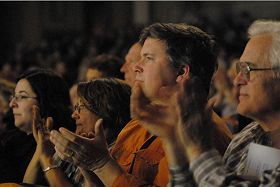 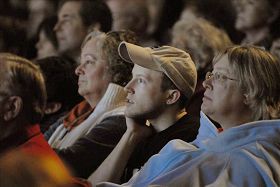 An enthusiastic audience takes in the Spectacular

Jan said, "Falun Gong practitioners obey the principle of 'Truthfulness-Compassion-Forbearance,' but they are being persecuted. It is ridiculous and makes people sad."

Chinese restaurant owner: People should step out and stop the persecution

Ms. Liu, a Chinese restaurant owner in Philadelphia, said, "I feel sad for those Falun Gong practitioners who have been persecuted. We should step out and stop the persecution. The persecution is really intolerable."

Ms. Liu said that she heard about the New Year Spectacular a long time ago. She was very moved by the performances, and felt proud of her Chinese culture. She expressed that she would go to New York to watch the show again when it plays there.

Westerners: Persecution should not happen

Napoleon Garcia, the publisher of the local newspaper Impacto, said that the persecution of Falun Gong should not have happened; it is against freedom of belief and freedom of speech and is also completely inhuman.

Yu Min, a Chinese medical researcher, said that the persecution should not have taken place. "We are all tired of it," he said.

Maria, an elementary school teacher from New Jersey, said it is obviously a shame that the persecution is still going on.

Sonia, an Indian high school student, said that persecution should not exist and we should all help to stop it and let more people know about it. She said that the show empowered her to stand up for justice and she would help to stop the persecution.

Indonesian visitor: the most important is to change people's hearts

Nyoman Riasa and his wife are from Indonesia. They are on vacation in Philadelphia and came to the New Year show.

Mr. Riasa has seen photos of persecution before, but seeing the dances about the persecution of Falun Gong made a very deep impression on him tonight.

He hoped the situation of Falun Gong practitioners in China would get better. He said he would help to let more people know about it, because the most important thing is to change people's hearts.