On the morning of January 27, 2008, Falun Gong practitioners in Tokyo and students from the Minghui School participated in the festival celebrations in Meiji Park. The practitioners' performance on the stage earned warm applause and cheers. 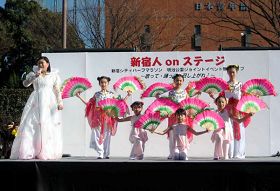 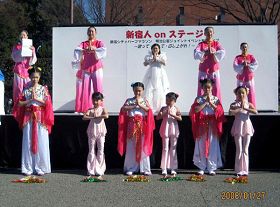 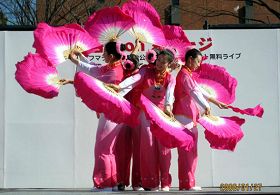 Shortly after 1 p.m., students from six to 12 years old from the Minghui School performed on the stage. Accompanied by a singing female practitioner, the dance caught the spectators' attention. When the dance ended, the audience applauded enthusiastically and remarked, "They are so lovely."

Next, the Tianzi Dance Troupe, made up of female practitioners from Tokyo, performed "The Thousand Hands of Bodhisattva Guanyin." During the performance, viewers exclaimed, "Nice," "Great," and "Beautiful." After the dance, the practitioners demonstrated the five sets of Falun Gong exercises.

"Where do you usually perform? Where can we see you perform again?" the host asked.

The leader of the Tianzi Dance Troupe answered, "We usually meet in the Shinjuku area. Actually, our skills are far from the famous Divine Performing Arts of New York, which will tour the world and will come to Shinjuku in mid-February. Please don't miss this opportunity to see this genuine, traditional Chinese performance."