(Clearwisdom.net) In December 2005, 1st Division Head Cui Yuanqi (male) and Chief of the prison supervisory section Niu Baojin (male) (police serial numbers 2158198 and 2158288) of Jinzhou Prison, Liaoning Province, illegally confined Falun Dafa practitioners Mr. Hu Jian'guo and Mr. Sun Jian in solitary cells. The solitary cell is less than three meters square and seven to eight meters high with a sunroof. One cannot leave the cell for any reason--a bucket serves as a toilet and one meal per day is provided. During their imprisonment, the guards used a method called "stool holding" to torture them. 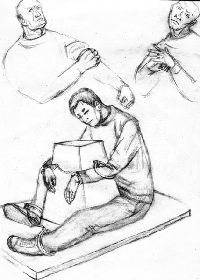 Stool holding: Attach a stool to a metal slab measuring 1.4 meters long and one meter wide. The stool, pyramid in shape and about two feet high, is placed upside down in the center of the slab. There are two metal rings, one on either side of the stool. The guards have the inmates force the practitioners to sit with their legs gripping the stool and their feet shackled. Their arms are placed around the stool, through the two rings, and then handcuffed. The metal rings are about one foot above the bottom of the stool so that they cannot raise their arms or straighten their backs. They have to squat down and bend over.

When Mr. Hu Jian'guo and Mr. Sun Jian were tortured with this stool holding method, Guards Cui Yuanqi and Niu Baojin ordered the inmates to monitor them and keep them from sleeping. Whenever they closed their eyes, the inmates beat them brutally. Only when it was mealtime or if they went to the toilet would the inmates open their handcuffs and release them from the stool. Other than that, they were forced to hold the stool all day long. The inmates were divided into three groups with at least two inmates in each group. Because Mr. Hu and Mr. Sun had to sit for so long, their buttocks festered. They suffered from back and foot pain. Their legs were numb and their hands became ice-cold. They could not stand up to eat or to go to the toilet unless two inmates pulled them up. The me were forced to hold the stool for as long as 25 days and were not allowed to sleep.

Practitioners Mr. Wang Cunbo and Mr. Zhang Guisheng, who were "illegally imprisoned" in the 2nd Division, were tortured with stool holding before Mr. Hu Jian'guo and Mr. Sun Jian.

In Jinzhou Prison, every practitioner was monitored by four inmates. They were not allowed to make phone calls or to mail letters or parcels. When their families visited them, at least two guards monitored them at all times. The four inmates wrote down when the practitioners ate and when then slept and forbade them from contacting or talking to other people.

"Good is rewarded with good and evil provokes retribution." This is a heavenly principle. The Team Lead of the 2nd Division, Li Xiangyang, male, 32 years old, who participated the persecution, died in a car accident when he took a trip on October 1, 2006. People who know the truth about Falun Gong said that his death proves this heavenly principle . Since then, the guards in Jinzhou Prison have restrained their evil behavior.