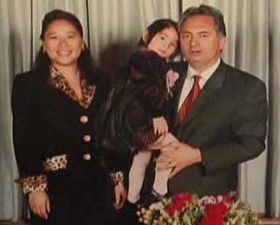 Markham City Councilor Ms. Yeung and her husband, Ontario MPP Mario Racco, attended the 2007 Chinese New Year Spectacular with their four children. She commented then that the performance was wonderful and tthe performers were extraordinary. She said that the design of the entire show was great.

Sandra Yeung immigrated to Canada with her parents from Hong Kong when she was still young. She thought loyalty and filial piety were two important characteristics of Chinese culture that have been passed down from generation to generation. Unfortunately, these principles are not as strong in Western society. The Divine Performing Arts' performances can inspire people to think about these qualities: "We hope such performances can influence our younger generation, let them bear loyalty and filial piety in mind, and we also hope that these principles can be brought to the Western world, and be accepted by it."

Ms. Yeung emphasized that we should learn to be loyal, including being loyal to ourselves, to our family, to country, and to our work, life and other careers. The principle of filial piety is showing respect for and being obedient to elderly people.

Mario Racco said that he was familiar with the principles of loyalty and filial piety because his wife is Chinese. He said that Chinese people should be proud of it, and these principles should be preserved by our next generation. "I think the show I saw last year was the best among all that I had ever seen. I have been to China, and also I have seen many different performances in Toronto, performances of different other ethnicities, such as Japanese, Chinese and Italian. But I had a very deep impression of the performance by (Divine Performing Arts) last year," said MPP Racco.

"We are happy to attend the performance to be staged on January 18 at Sony Center. We invited everybody to come to watch this wonderful Chinese New Year Spectacular."