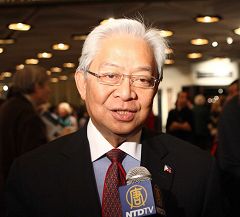 Mr. Brillantes said that the charm of Chinese choreography and the power of the dance with the drums, blended well with the dance portraying the persecution of Falun Gong. They conveyed the Chinese tradition of peace and harmony, but also a sense of power.

The show has drawn people from all walks of life in Canada. In addition to government officials, many diplomatic envoys have attended the Spectacular.