(Clearwisdom.net) The touring company of Divine Performing Arts presented the Chinese New Year Spectacular at the Dodge Theatre in Phoenix on the evening of January 14, 2008. Western and Chinese audiences highly acclaimed the wonderful performance. At the end of the show, the audience gave prolonged and enthusiastic applause. This was the first time that Divine Performing Arts came to the city of Phoenix. Show attendees expressed their sincere gratitude to the sponsors and all performers and staff, and earnestly look forward to seeing the show return next year. 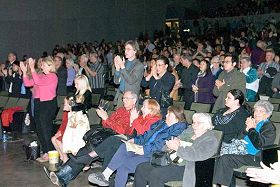 After the show, many audience members gave a standing ovation

Software engineer Willus Shell liked the dance "Water Sleeves" very much. He said that it was the best artistic performance that he has seen in a long time. He was very glad he came.

A retired elderly man named Jack said that he had never seen such a special performance in his life. "It was really wonderful," he said.

Mr. Wang is a Chinese acupuncture physician from Tucson. His whole family drove two hours to attend the show. From the very beginning of the show, he was captivated by beautiful pictures and animation techniques of the backdrop. He said, "The backdrop designs were very good, particularly the backdrop for the first performance 'Descent of the Celestial Kings.' I have never seen such a breathtaking scene. It was stunning!"

Of all the programs, Mr. Wang liked the dance drama "The Power of Awareness" the most. It was also one of the pieces that the whole audience reacted to the most enthusiastically. When followers of "Truthfulness-Compassion-Forbearance" clarified the facts about Falun Gong to people, they were subjected to the police's violent beatings. In the face of such brutal treatment, the people no longer kept silent, and they stood up to defend these innocent people. When the police fled in disorder, the audience gave resounding applause. When the persecutors were completely driven away and the people respectfully joined the Falun Gong group, the audience burst out another round of enthusiastic applause.

"The Story of Yue Fei" is a story that has been passed down from generation to generation in Chinese history and moved countless Chinese people. When the hosts introduced the dance drama, the Chinese audience was very excited. As soon as the host finished the introduction, many Chinese audience members could not help bursting out in enthusiastic applause. They were pleased to share this outstanding part of Chinese culture with the Western audience.

The mayor of Phoenix Phil Gordon stated in his proclamation, "The mission of Divine Performing Arts is to rediscover and present the essence of true, traditional culture and to bring arts to the world that celebrate human dignity and positive values;"

Gordon commended the excellent artistry of the show, stating, "Hundreds of dancers, musicians, designers, choreographers, and production specialists work year round to ensure the authenticity of the presentations and the artistic excellence of the production;" "The Divine Performing Arts group has toured more than 30 cities around the world, gracing some of the world's most prestigious theatres and showcasing authentic traditional Chinese culture."

Arizona State Governor Janet Napolitano stated in her congratulatory letter, "This grand event is a special way to usher in a brand new year, and is indeed a unique opportunity in which to welcome in the Year of Rat. The Divine Performing Arts' expressive performance raises public awareness about traditional Chinese culture and they can be proud of the service they provide to our community. "

Divine Performing Arts company accepted the invitation of the Phoenix Foundation of Traditional Culture in mid 2007 when it planned its itinerary for its world tour. Thus, Phoenix has become one of the fortunate cities in which the Chinese New Year Spectacular was presented.

Many audience members wished that more of their friends and relatives could have seen the show, and earnestly hoped that there would be more shows next year. They suggested the sponsor to arrange two or three weekend shows next year.