(Clearwisdom.net) On January 6, 2008, Munich Falun Gong practitioners held an activity supporting thirty million withdrawals from the Chinese Communist Party (CCP) in front of the Chinese Embassy. After seeing the banners exposing the CCP's organ harvesting from living Falun Gong practitioners, passers-by were shocked, and many people signed petition forms to stop the atrocities. 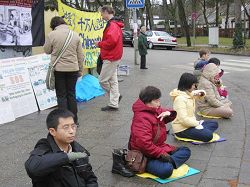 Recently, many activities supporting the withdrawals from the CCP were held globally. With the rise in the number of withdrawals, the exposure of the CCP's crimes and the awakening of the Chinese people, the CCP regime is being weakened. More Chinese people are able to recognize the CCP's evil nature, understand Falun Gong and join the huge tide of withdrawing from the CCP. The CCP is destined to fall.

It was on the weekend, and many families went out to have a walk. When they passed by the Chinese Embassy, they slowed down. Some of them stopped and carefully studied the display boards exposing the CCP's persecution of Falun Gong. As the live organ harvesting was hard to fathom, many people questioned whether living people were selected for their organs. When they learned the facts, all of them were shocked. Many people signed their names on the petition forms, hoping to help Falun Gong practitioners in China.

A lady had a long conversation with the Falun Gong practitioners. She told them that she would go to human rights organizations right away the next day to report this crime. She wished to help the Falun Gong practitioners. She said that this matter is related to every German citizen, for human rights is a universal value. The next ones could be us, if we turn a blind eye toward such crimes.