(Clearwisdom.net) On September 5, 2007, Falun Gong practitioners from New South Wales, Australia, held a press conference to announce the filing of a new lawsuit against Bo Xilai, the Chinese Commerce Minister, for torture. The lawsuit was served in Canberra when Bo arrived at the night of September 4.

According to the Australian law, Bo Xilai must respond to the lawsuit within two months, otherwise, he will be faced with a default trial. Sydney Morning Herald, NTDTV, The Epoch Times and several media from Japan and Taiwan attended the press conference. 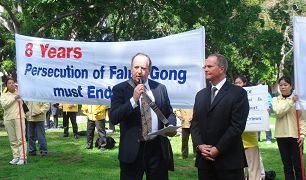 A practitioner describes the process of serving Bo the lawsuit.

In the evening of September 4, Jonathan Solomon and Gary Hastie went to the Hyatt Hotel in Canberra, where Bo was going to stay. Around 10:30pm, Chinese president Hu Jintao, Bo Xilai and other Chinese officials came into the hotel. Jonathan recognized Bo and shouted his name in Chinese. Bo was shocked. Jonathan delivered the lawsuit to Bo before the Chinese guards rushed to them. Jonathan told Bo, "You are served." Then, he and Gary shouted "Falun Dafa is good," and left the hotel without any obstacles. They attended a candlelight vigil in front of the Chinese Embassy after delivering the lawsuit.

Bo Xilai came to APEC as the Chinese Commerce Minister. On September 3, the Falun Dafa Association in New South Wales wrote to Kevin Andrews, the Australian Immigration Minister, asking him to keep Bo from entering Australia based on the 501st article in the Immigration Law.

In April 2006, when Bo Xilai visited Australia with the Chinese Prime Minister Wen Jiabo, Pan Yu, an Australian citizen and a Falun Gong practitioner, filed a lawsuit against him for torture. In 2000, Pan Yu was jailed in Longshan Labor Camp in Liaoning province, where he was badly tortured because of his Falun Gong belief.

Mr. Newton, legal counsel for the plaintiffs, told the press conference that the lawsuit delivered to Bo this time is an updated version of the one in 2006. According to the Australian law, Bo Xilai must respond to the lawsuit within two months, otherwise, he will be faced with a default trial. If Bo doesn't respond by October 8, the plaintiffs will request a default trial.

Sydney Morning Herald published an article on September 4, titled "Chinese President to be handled with care." The article mentioned the lawsuit against Bo:

"The visit to Australia by the Chinese President, Hu Jintao, is expected to be dominated by sensitivity over strategic manoeuvring in North Asia, climate change, the signing of a big natural gas supply deal and protests over human rights violations in his homeland.

"Members of the Falun Gong spiritual group yesterday called on the Federal Government to ban the entry of the Chinese Minister for Commerce, Bo Xilai, who is due to arrive tomorrow for the APEC forum.

"A spokesman for the group, John Deller, said Mr Bo was being sued in the NSW Supreme Court for alleged torture of Falun Gong members when he was governor of Liaoning province. Everyone entering Australian was subject to a Migration Act character test and on that basis Mr Bo should be denied entry, Mr Deller said."

Bo Xilai was actively involved in the persecution of Falun Gong when he was the governor of Liaoning Province. He was sued for torture in more than ten countries, including the United States, the United Kingdom, Canada, Germany, Ireland and Australia.