The sixth American-Korean-Chinese Multicultural Day was jointly held by Upper Gwynedd Township Parks & Recreation and the 21st Century American-Korean-Chinese Leaders Society in the Parkside Place of West Point, Pennsylvania, on September 15, 2007. Last on the program was the lotus dance performed by children Falun Gong practitioners of the Delaware Valley Minghui School. They were warmly applauded. 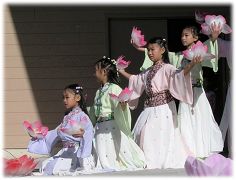 Korean community groups and Chinese schools in Philadelphia participate in the American-Korean-Chinese Multicultural Day every year. Many Chinese were those hard to reach for truth-clarification.

This was the first year that the young Falun Gong practitioners performed at the Multicultural Day event. Their unique and beautiful costumes stood out. A Chinese man asked, "Ah! Beautiful! What kind of costume is this?" The performance reflected the purity, beauty and compassion of children that adhere to "Truthfulness-Compassion-Forbearance." The audience was very touched and gave them warm applause.

After their performance, the children distributed elegant hanging decorations with information on the Chinese New Year Spectacular. The Chinese spectators were surprised and hesitant at first, but then they not only accepted the decorations, but also asked for more for their friends.

The students of the Delaware Valley Minghui School are children Falun Gong practitioners in the Greater Philadelphia Area. To help spread Falun Dafa and expose the persecution, they gave a very successful show after only a few rehearsals.