Falun Dafa practitioner Ms. Jin Huizhen from Shanghai was taken into custody on July 21, 2007, in Gongkang Fourth Village, the Zhabei District, Shanghai. She was later imprisoned in Zhabei District Detention Center for more than a month. On Wednesday, September 5, 2007, she was transferred to Qingpu Women's Forced Labor Camp. A week later officials at the camp had still not given her family any written news about her, causing tremendous psychological distress. 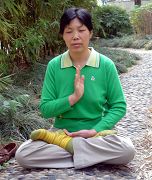 When she arrived at the detention center Ms. Jin's calves were black and blue, possibly from being kicked by the Sanquan local police and/or the person who reported her to the authorities. During her first month in the detention center, she staged several hunger strikes to protest the unjust imprisonment. On August 15, she was sentenced to one year of forced labor on a charge of "distributing three pieces of Falun Gong materials." Other so-called "evidence" was the paper bag she left, containing--according to the authorities--125 pieces of truth clarification materials. According to her count, there were only 90 fliers. The authorities falsified the number in order to sentence Ms. Jin Huizhen to the forced labor camp.

Fang Jianrong and Tang Jingfeng, personnel with the State Security Division of the Zhabei District Police Department, handled Ms. Jin Huizhen's case. These two men also participated in the fabrication of false evidence to persecute her. The Zhabei District 610 Office is pulling the strings behind the scenes. Chief of the Zhabei District Police Department Dong Yongzheng signed the order to sentence Ms. Jin to forced labor. Other participants include the secretary of the Political and Judiciary Committee Zheng Jianlin and the assistant deputy secretary Zhang Jianguo.