On September 22, 2007, the annual Tulip Show was held in Bowral, Sydney. Thousands of people attended the show, including local Falun Gong practitioners. 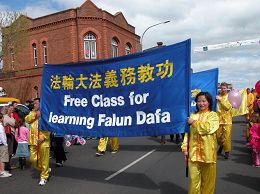 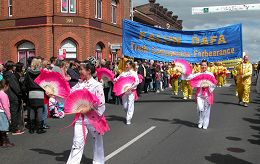 Practitioners had a booth on Bongbong Street, the busiest street in the show. Many people came to the booth and learned the facts about Falun Gong. Some mothers and children came to learn how to make paper lotus flowers. Some people asked for detailed information about Falun Gong.

The parade started at noon. The practitioners' entry consisted of three parts: a fairy dance team, a banner team, and a waist drum team. Their entry was one of the biggest in the parade and well-received. Practitioners used the opportunity to distribute many truth-clarifying materials.

After the parade, many spectators took photos with practitioners, and some of them went to the practitioners' booth for more information.

“We Can't Just Wait for the End of the Persecution”