On the last day of the Falun Dafa Nine-Day Fa-study and Exercise Classes held in Ching-Guo New Town in Chiayi City, Taiwan, on August 21, 2007, after listening to Master Li Hongzhi's lecture, many villages told the Falun Dafa practitioners who organized the class that they hoped to continue studying the Fa and doing the exercises together. 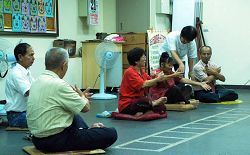 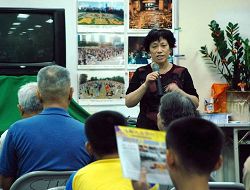 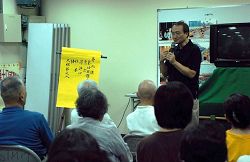 A practitioner who is a professor shares his cultivation experiences

A Falun Dafa practitioner who came to Taiwan from mainland China shared her cultivation experiences. She said that shortly after she started practicing Falun Dafa together with her daughter, their illnesses, which had been incurable for a long time, disappeared. She experienced the magnificent and miraculous effects of Falun Dafa first hand. Since the Chinese Communist Party started the persecution of Falun Dafa in July 1999, her relatives who practiced Falun Dafa were illegally arrested and detained. However, she still remained steadfast in her cultivation.

The practitioner said, "One day, when I returned home from the market, I opened the door, and found that more than ten large and sturdy men were in my home. They said that someone had reported to them that I practiced Falun Dafa. They came to ransack my home. I realized that it was possible that a fellow practitioner who came to deliver Falun Dafa truth-clarifying materials to me was tracked by the police. I explained to them that I practice Falun Dafa, and cultivate Truthfulness-Compassion-Forbearance, and that practicing Dafa is not a crime."

After coming to Taiwan, she found a local practice site. Practitioners helped her buy Falun Dafa books and assisted her in taking part in Fa-validation activities. She deeply felt the difference between the cultivation environment in Taiwan and that of mainland China. She said, "When I was in mainland China, I studied the Fa secretly. It is so good to be here. I can do the exercises freely, I can speak up when clarifying the facts and tell people openly that 'Truthfulness-Compassion-Forbearance' is good.' At the same time, after exchanging insights and experiences with Taiwanese practitioners, I have a better understanding on how to cultivate my xinxing, and how to look within to find my shortcomings and improve myself. I believe that as long as you keep up in cultivation, supernormal and miraculous effects of Dafa will manifest in your life."

She sincerely declared that now since seeing Falun Dafa here in such a particularly free environment, she hoped that nobody would miss such a rare opportunity.

A workshop participant said firmly after listening to the practitioner's experience sharing, "I have listened carefully to Master's lectures over the past nine days, and I believe all that he had to say. I have truly entered Falun Dafa cultivation now."

A practitioner who is a professor at a university also shared his cultivation experiences over the past several years. He said, "Every time I read Zhuan Falun, I understand things differently, from different angles, just as Master explains in the book. He continually guides us up to higher levels. If we read Falun Dafa books without any human notions, Dafa will open up our wisdom, and what you say is able to touch others' hearts. Although cultivation is difficult, as long as we cultivate based on the Fa and understand things from the Fa, when we pass tests, we will feel that our capacity is broadened and we feel all the cells in our body and our thoughts change." Finally, the professor said that he also hoped that everybody would grasp this historical moment when Dafa is being spread widely, and not let Dafa pass them by.

When the nine-day class concluded, practitioners also coordinated together and set up a practice site in the village, helping people to practice the five sets of exercises. The villagers smiled and remarked that learning Dafa was a wonderful event.