Sweden: "You Must Help More People Learn the Facts" (Photos)

On August 25 and 26, 2007, from 9 a.m. to 1 p.m., Falun Gong practitioners in Sweden made use of the two day holiday to demonstrate the Falun Gong exercises at the famous Vasa Museum in Stockholm. In the meantime, they also set up truth clarification display boards to let tourists from various places around the world learn the facts about Falun Gong, and expose the Chinese Communist Party's (CCP) atrocities of harvesting organs from living Falun Gong practitioners as well as the cruel persecution of Falun Gong in China over the past eight years. In addition, they also introduced the Nine Commentaries on the Communist Party and the huge campaign to quit the CCP that is sweeping China. 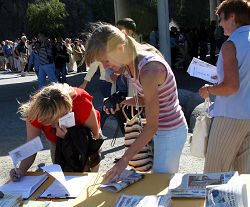 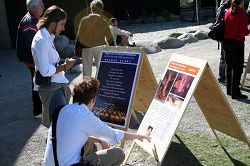 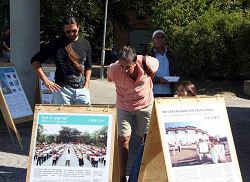 People passing by look at display boards to learn the facts

As soon as the display boards were set up, a formally clad taxi driver came over to view them attentively and took the initiative to talk to practitioners. When he had heard the facts about the persecution, he signed the petition. He said that he often spotted Falun Gong practitioners, and used to think that they were there for themselves, but finally he realized that they were there for others. He sincerely appreciated the practitioners for telling him the facts about the persecution. Furthermore, he sincerely said to them, "Can you give me more materials? I'll be responsible for the transportation of over 50 tourists in two groups from China. I would like to help you put an end to the horrendous situation in China."

A Chinese person that lives in Stockholm passed the scene when she took her seven-year-old daughter to a Chinese language school. She was pleased to receive a flyer. She told the practitioners that she had just come back from China, and was very disappointed about the situation there. She thought that her daughter was very lucky to be able to study overseas. She said, "I cannot imagine how China's current system would educate my children. I totally believe what you have told me here. For money, the CCP can do anything. Few of those in charge are really concerned about the ordinary people. I wonder how many more days they can survive." When practitioners told her about the campaign to quit the CCP she did not take it seriously. When they further explained to her the significance of the campaign, she said that she would think it over at home.

A middle-aged man from Beijing was excited to meet the practitioners. He said, "I got a DVD version of the Nine Commentaries. It is still in good condition. I have taken good care of it ever since I got it, and it is circulating among my friends." When practitioners told him about the great wave of people quitting the CCP, he added: "All my family members were persecuted by the CCP in the past, so we were victims of the CCP. Under no circumstances will I have anything to do with the CCP. You should hold activities where there are more Chinese people. The Chinese people are so unfortunate--you should help more of them learn the facts."

“From Being Computer Illiterate to Writing Software Programs”

“A Miraculous Cancer Cure Helps My Family to Believe in Dafa”