On September 15, 2007, Falun Gong practitioners in the San Francisco Bay Area continued truth-clarification activities in Chinatown. As a result of the ongoing truth-clarification, the situation in San Francisco is different from what it was a few months ago. Practitioners indicated that no matter how evil the Chinese Communist Party (CCP) is and regardless of the fact that the CCP operates in Chinatown, practitioners continue to practice the exercises, distribute literature, explain the facts and save sentient beings there. 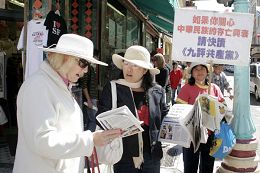 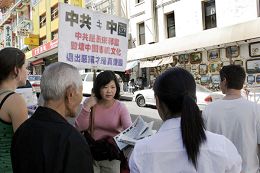 Practitioners explains that China does not equal the Chinese Communist Party. Quitting the CCP is to be truly patriotic 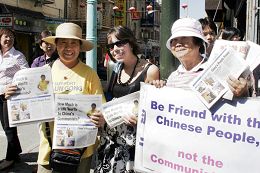 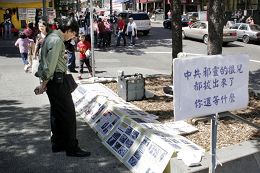 Practitioners set up truth-clarification poster boards along the main sidewalk

Ms. Zhang goes to work during the week and comes to Chinatown to explain the facts on weekends. She indicated that she would come to Chinatown however busy she was. She said that the effect of truth-clarification was good when she had righteous thoughts. Several people quit the CCP that day.

Practitioners from Auckland and other areas came to Chinatown and the Chinese Consulate by subway for truth-clarification activities. San Jose is one hour away from San Francisco by car. Every day, practitioners who are able to drive bring those who cannot drive to Chinatown to clarify the truth. A tourist visiting Chinatown exclaimed that Falun Gong is wonderful after hearing Ms. Zhang's narration of her personal experience of getting rid of illness through the practice. After she heard about the CCP's brutal persecution of such a good practice, she said, "It's horrible."

Yaqin has been practicing Falun Gong for a few months. She often comes to Chinatown to help with truth-clarification activities. She cannot drive and her English is not fluent. She rides the subway for two hours to Chinatown with the money she has saved. She indicated that recently, the Minghui Weekly has been distributed quickly and there were some people specifically asking for the newspaper.

Yaqin found that Chinatown had changed for the better in just a few months. A couple of days ago, an elderly woman brought cake to her while she was distributing literature. A gentleman brought fruit to her. Yaqin said, "Now the evil factors are becoming less. People are coming to know the facts and express their admiration to practitioners. Often, someone comes up to me and says, 'I support you. I will see the day that the CCP disintegrates.'"

“Jolted by the Article, "Let Us End the Persecution Now"”