On September 11, 2007, the "Human Rights Torch Relay", organized by the CIPFG (Coalition to Investigate the Persecution of Falun Gong in China) and IGFM (the International Society for Human Rights) arrived in Vienna, Austria. Albert Steinhauser, a congressman in Austria, came to Michaeler Platz to carry the torch on behalf of the city of Vienna. He gave a speech, and then the organizers carried the torch to the old town of Vienna, four kilometers away. Among the runners were 58 students and three teachers from the Borg Wiener Physical Education School. After the run, a concert was held, with famous singers such as Sabina Hank and Guenther Mokesch performing. 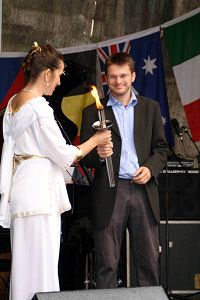 Albert Steinhauser, a congressman of Austria, came to Michaeler Platz to carry the torch on behalf of the city of Vienna. 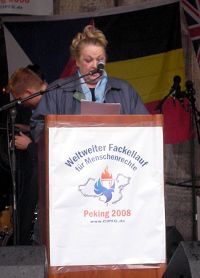 Katharine Grieb, the chair of the Austria Chapter of IGFM 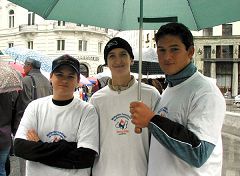 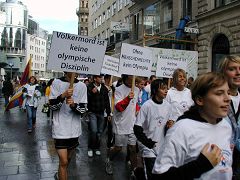 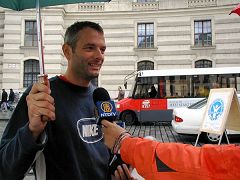 Peter Steinwender, a teacher, said that his students learned a lot from the day's activity 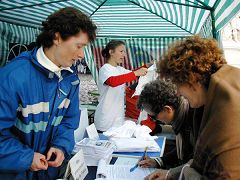 Signing petitions to condemn the persecution

Congressman Steinhauser gave a speech in which he stated that people pay more attention to the economy in China than torture, organ harvesting and lack of freedom. He called upon people not to be deceived by the fake economic development and to pay attention to human rights violations in China. He pointed out that the human rights violations in China should be exposed and people should take action to stop it.

Cardinal Schoenborn, the Archbishop of Vienna, as well as Harald Ettl, Karin Resetarits and Christa Prets--three European Union Parliament Members from Austria--also came to the rally to express their support. Karin Resetarits pointed out that the Chinese regime publicly promised to improve the human rights situation in China, but the violations still exist.

CCP brutality is the opposite of the peaceful Olympic spirit

Katharine Grieb, the chair of the Austria Chapter of IGFM, said that the spirit of the Olympics is peaceful and the Chinese Communist Party's (CCP) brutality is the opposite of that. She said that she was not calling for a boycott of the Olympic Games; she just wants everybody to know what is happening and what will happen in China. She said that everyone in the world should know what has been happening in China and nobody should say that he or she doesn't know. Ms. Grieb said it is a sin to keep silent about the human rights violations in China. She said that her group is against the Chinese dictators, not the Chinese people.

"Every artist has the responsibility to protect human rights and justice"

Renate Reich, a singer from Vienna, performed at the concert. She said that the organ harvesting reminded her of the persecution of Christians two thousand years ago.

She said that the purpose of the human rights torch relay is to expose the persecution to the public and remind people of what is happening in China.

Sabina Hank, a famous singer in Austria, said that she came to the event for three reasons: for human rights in China, to protest against the Chinese dictators, and to expose the facts to the public and let everybody know what is going on in China. She said that every artist has a responsibility to protect human rights and justice.

Students benefit from the activity

In the afternoon, the torch was carried to the old town of Vienna. Among the runners, a group of high school students from Borg Wiener Physical Education School were particularly impressive.

A 16-year-old student told the reporter after the run that he was very glad to attend this activity, which will help expose the persecution to the world.

Peter Steinwender, their teacher, told the reporter that these 58 students are from a school 50 kilometers from Vienna. He learned about the torch relay last Friday from a student and decided to attend it right away. Many students registered. He said that the students benefited a lot from this activity and will think about it more in the future.

He said that everybody knows something about what is going on in China, but nobody knows how severe the human rights violations are there. He criticized some Austrian government officials who prohibit protests against visiting Chinese officials because they want to do business with China. He was glad to attend this activity, which he thinks will have some influence on the public.