Kansas: "Look, This is the Falun Gong from Our China!" (Photos)

On September 7 to 9, 2007, the 109th annual Old Settlers Day celebration attracted tens of thousands of residents in Johnson County and neighboring areas in Kansas. Numerous stalls were set up on several streets near the County Government Building. People brought their entire families and their friends to observe and enjoy the activities.

Tens of thousands of spectators line the parade route 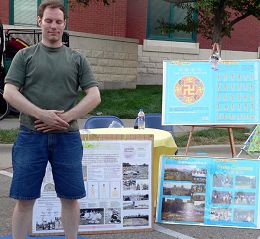 "Do you have Falun Gong books here?" a Chinese woman with her daughter earnestly asked a practitioner at the stall. The woman told the practitioner that she often read news about Falun Gong in the Epoch Times newspaper, and she wanted very much to learn Falun Gong. She was so lucky to find the practitioners today. She left with great joy after learning about the details of a local practice site.

The parade on the morning of September 9 attracted crowds of spectators on the roadside along the parade route. Falun Gong practitioners brought beauty and harmony to the audience, and also brought pride to the Chinese people. A young Chinese woman excitedly said to a western man standing beside her, "Look, this is the Falun Gong from our China!"

During the festival, many people learned how to study and practice Falun Gong.