Reflections on CCTV Faking a "Death" on a Television Program (Photos)

Recently, in a special program called "Secrets About Pyramid Sales Schemes" CCTV12 channel reported on an example of a female college student who, it was claimed, had died after participating in pyramid sales schemes. The pictures of the victim that were displayed had been modified with computer software. Careful Internet users discovered that the photos of the "victim" actually were modified pictures of a well-known person on the Internet named Ayawawa. This deception used by CCTV was exposed on the Internet and caused a great disturbance. It was reported that CCTV asked Ayawawa not to make it a bigger matter. 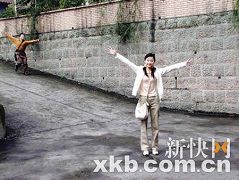 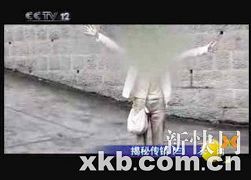 After I read this news, I could not help thinking of another girl who was reported dead by CCTV. Her name was Liu Siying. Liu Siying was one of the victims in the "Tiananmen Self-immolation Incident" that the Chinese Communist Party (CCP) reported on extensively. Because she was only twelve years old, many people were drawn to her story. By repeatedly broadcasting the brutality of an innocent girl ablaze, the CCTV seeded hatred toward Falun Gong practitioners, who were accused of causing the immolations.

As a severe burn patient, Liu Siying was given a tracheotomy, but she was able to be interviewed by a reporter. The reporter did not wear protective clothes or a mask during the interview.

What the audience did not realize was that Liu Siying was a prop utilized by CCTV to deceive them. The fate of Liu Siying was indeed terrible, but her life was actually ended by CCTV.

After the "Tiananmen Self-immolation Incident" was broadcast on the "Focal Point" program on CCTV, many ridiculous falsehoods were pointed out by medical professionals. In the program, Dr. Li Chi from Jishuitang Hospital performed a tracheotomy on Liu Siying. In such an operation an incision is usually made below the vocal chords, and the patient breathes through a tracheal tube. During the first few days after the operation, it would be very difficult for the patient to make a sound at all, much less talk. Even if the patient's situation is stable and the airway and larynx are not swollen, the patient would have only a weak and unclear voice. On the TV program, however, the child identified as Liu Siying talked clearly to the reporter a mere four days after her operation.

According to the Xinhua News Agency, the girl Liu Siying was severely burned over about 40 percent of her body. Professional medical experts know that third degree burns over more than 20 percent of the body may lead to severe complications. During the first stage, the patient may experience dehydration, shock, infection, kidney failure, respiratory acidosis, and even multi-organ failure. This type of patient is usually closely monitored. During this first stage the patient will have some degree of post-traumatic stress symptoms including collapse or coma. How could such a patient talk to a reporter with such high spirits and clear thinking?

For this kind of patient, the most perilous thing they face is bacterial infection. Shock resulting from infection is the main cause of death in such patients. Therefore, in modern hospitals, these patients will be monitored in an Intensive Care Unit (ICU) free of bacteria. However, in the program on CCTV, the reporter who interviewed the "victim" did not wear protective clothing or even a mask. She held a microphone to interview the girl, despite her severe burns. From a medical angle it's unbelievable that this would happen in Jishuitang Hospital, a facility that specializes in the treatment of burns. In this episode of "Focal Point" the reporter claimed to care about life. However, bacteria from the mouth of the reporter, who did not wear a mask, would immediately threaten the life of Liu Siying, since there are countless bacteria in saliva and on a microphone.

In less than two months after the immolation incident, the CCP declared that Liu Siying was dead from heart disease. A commentary pointed out that the miserable fate of this12-year-old little girl moved many people's hearts. Yet, since she knew the truth about the incident, her very existence caused the CCP grave concern. They were not sure what she might say and she couldn't be kept under tight surveillance forever, so her destiny was to die suddenly. Without any solid evidence, outside media could only speculate about the true cause of her death.