Launching candles and lamps on small, handmade model boats (water lanterns) is a unique folk custom that is honored at the "Chungyuan Festival." It has a 153-year history in Keelung City. This year the event started on the night of August 26, 2007. Vice President of Taiwan Ms. Lu Shiulian and former president of the Republicans Party Mr. Ma Yingjiu spoke at the event. There was a lively parade before launching the water lanterns. It included a decorated Falun Gong float and the Divine Land Marching Band. Thousands of spectators lined the streets to watch the several-kilometer-long parade. 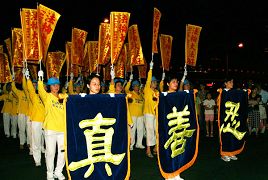 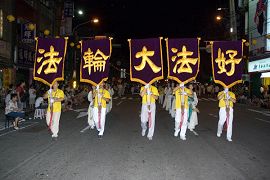 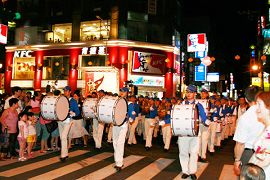 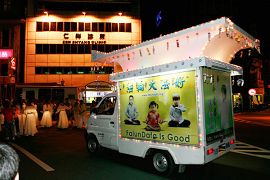 A decorated truck with posters proclaiming, "Falun Dafa Is Good"

The Chungyuan Festival originated from a story in Buddhism entitled "Mulian Saves His Mother." Mulian was one of the Buddha's students who had superior powers. In order to save his mother from the "hungry ghost world" within reincarnation, he started to perform the "Yu Lan Peng Hui," a Buddhist ceremony to save dead relatives from hell, on July 15 of the lunar calendar.

The parade started at 6:00 p.m. After Vice President Lu Shiulian and Mr. Ma Yingjiu spoke, the groups marched past the platform with VIPs including the governor of Palau, a mayor from Japan, and overseas Chinese representatives from the Ryukyu Islands.

Besides the fifteen decorated trucks and floats representing the fifteen large local families, the Falun Dafa Association was invited to perform. The Divine Land Marching Band has 200 members, all of whom are Falun Dafa practitioners. They performed "Falun Dafa Is Good" along the entire procession, and spectators waved their hands over their heads and called out "Falun Dafa is great!" After the band came the "Celestial Maidens." People were excited to receive the lotus flowers that the "Celestial Maidens" were handing out. The spectators and VIPs all enjoyed the beauty of Falun Dafa. 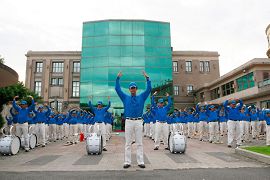 Before the parade, members of the Divine Land Marching Band practiced the exercises in front of the Yangming Ocean Culture and Art Museum in Keelung City

The Falun Dafa Association's performances were the most exciting ones in the parade. The emcee introduced the founder of Falun Dafa, Mr. Li Hongzhi, and the uniqueness of the exercises. She said, "The group is composed of people from all walks of life. They want to bring the beautiful message 'Truthfulness-Compassion-Tolerance' to all the guests here."

When the Divine Land Marching Band marched by, the spectators chanted "Ha, it was grand and solemn." The parade ended at 10:20 p.m., after performing for over four hours. But the spectators were still not willing to leave.

“Sweden: Promoting the Fa at Places of Interest, Falun Gong Is Highlighted in Stockholm (Photos)”