Canada: Members of Parliament and the Public Urge the Prime Minister to Help Stop the CCP Persecution by Raising the Issue at the Upcoming APEC Meetings (Photos)

On August 29, 2007, a petition letter with the signatures of seventeen thousand Canadians was sent to the Prime Minister's Office. The letter called on Canadian Prime Minister Stephen Harper to raise human rights issues to Chinese leaders during APEC (Asia-Pacific Economic Cooperation) meetings in Sydney, Australia, September 2-9. The petition urged the Prime Minister to call for an end to the persecution of Falun Gong and to the practice of harvesting organs from living Falun Gong practitioners, and for the release of all Falun Gong practitioners being imprisoned, including16 relatives of Canadian residents. 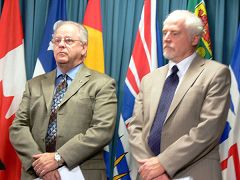 Alex Neve (right), Secretary General of Amnesty International Canada, and Wayne Marston, Member of Parliament, urged the Prime Minister to raise China human rights issues to Hu Jintao and call for an end to the persecution of Falun Gong 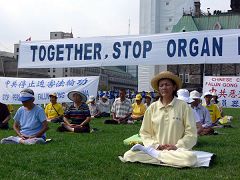 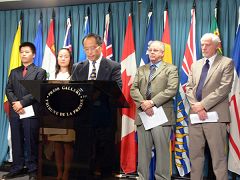 At a press conference on August 29, Mr. Li Xun, President of Falun Dafa Association of Canada, read a statement 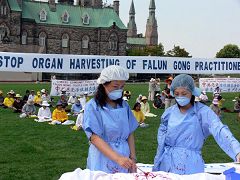 Anti-torture exhibition held in front of Canadian Parliament, "Together, Stop the Harvesting of Organs from Falun Gong practitioners" 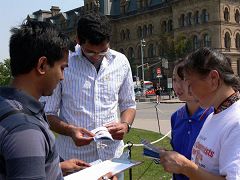 Alex Neve, Secretary General of Amnesty International Canada, and Wayne Marston, Member of Parliament and Rights Critic for the New Democratic Party (NDP), indicated that APEC is an important opportunity to have the Prime Minister raise China human rights issues to Hu Jintao and ask him to stop the persecution of Falun Gong.

MP Marston: "His eyes indicated that persecution is occurring"

At the press conference, MP Marston mentioned his experience of visiting Beijing as part of the delegation with Foreign Minister Peter MacKay in April this year. He said, "I raised a question with a dissident: 'Is there any truth to the persecution that is happening?' He didn't answer me in a direct fashion because of the fact that other people were present, but it was very clear that, yes, the persecution of Falun Gong was happening, as well as with other people. He stared intently into my eyes as he told me this and those are words I will remember for the rest of my days."

He said that the NDP has repeatedly called upon the Prime Minister to raise the issue of the persecution of Falun Gong with the Chinese president. APEC is the perfect opportunity for Mr. Harper to do just that.

He said, "The eyes of the world are on China because of the Olympics. It's the most important time for our government to stand up for human rights."

Last year, the NDP put forward Bill 162 to Parliament, which calls upon Canada to use all of the normal channels, such as the United Nations and interactions with the various government officials from China, to raise the issue of the ongoing human rights violations that occur in that country.

He said, "The NDP has made repeated calls for the Chinese government to halt its persecution of practitioners of Falun Gong and specifically on ongoing human rights violations in general. We have and will continue to raise the Canadian public's concerns over the continued violation of human rights in China to our own government. We will use every opportunity, official visit, correspondence, and meeting between Canada and China to highlight the persecution and to work towards stopping the violations and ensuring that human rights are upheld in China."

Amnesty International: "Prime Minister Harper should use the opportunity of the APEC meeting held in Sydney to encourage other governments to speak out on the human rights concern"

Mr. Neve said, "The Prime Minister must let the Chinese leader know that Canadians expect some real improvements in human rights protection in China, including the imprisonment of Falun Gong practitioners with Canadian connections such as the cases like Jian Ma, and others that we will hear about soon."Prime Minister Harper should use the opportunity of the APEC meeting held in Sydney to encourage other governments to speak out about the human rights concern as well, for there will only be real change in China if the demand for change is heard consistently from across the world. The time to do so is particularly optimum as the 2008 Beijing Olympics are now only one year away. When they were successfully awarded the games, the Chinese government assured the world that the Olympics would be a catalyst for human rights improvements in the country. And the world, including governments and international committees, have done very little to remind China of that promise. Prime Minister Harper should do so in meetings with other leaders at the APEC gathering. APEC leaders must now insist that China take steps to curtail the widespread and serious violations against Falun Gong practitioners and others across China. This meeting in Sydney is the critical opportunity to do so. Thank you."

Spokesperson Zhou Limin of the Falun Dafa Association said that within two weeks, over seventeen thousand Canadians in many cities in Canada had signed the petition urging the Prime Minister to raise China's human rights issues, especially the persecution of Falun Gong.

Mr. David Kilgour, one of the authors of the report on the CCP's organ harvesting from living Falun Gong practitioners, former Secretary of State (Asia-Pacific) for Canada, and senior Member of Parliament, said during an interview, "All kinds of thoughtful persons and groups are increasingly speaking out about human dignity in China. The worst abuses continue to be inflicted on Falun Gong practitioners. No government which continues to kill its own citizens to sell their organs can expect to host any Olympic Games in peace."

Mr. Brian McAdam, former senior diplomat, participated in the rally. He wished that the Canadian Government would not be deceived by China's false economic prosperity. He said that the CCP brutally persecutes Falun Gong practitioners and other groups.

Mr. Fred Muzin, President of the British Columbia Hospital Employees' Union (BC Health Services Division of the Canadian Union of Public Employees), wrote to Stephen Harper, the Prime Minister of Canada: "We are encouraged by our Canadian government's outspoken stance on human rights in China, but we strongly believe that this discussion on human rights cannot be complete without an unequivocal, public statement against the persecution of the Falun Gong."

Dr. Abraham L. Halpern, professor of psychiatry, wrote to Members of Parliament: "No doubt you are aware of the countless reports of serious human rights violations in the People's Republic of China, in some cases clearly constituting crimes against humanity, particularly the persecution of Falun Gong practitioners and political dissidents. Falun Gong adherents, innocent in all respects, have been abducted, confined in jails, prisons, work camps and maximum security psychiatric institutions, tortured and brutalized and subject to removal of body organs in connection with a widespread organ transplant program in China."

"I hope you will take this important step and show the world that Canada continues to be in the forefront of the struggle for fundamental human rights everywhere."

MP Leon Benoit also wrote to the Prime Minister and hoped he would urge Hu Jintao to stop the persecution during the APEC meeting.

Zhou Limin said, "The most severe China's human rights issue is the persecution of Falun Gong. Manfred Nowak, Special Rapporteur on torture at the U.N., pointed out in his report that 66 percent of alleged tortures and abuses occurred to Falun Gong practitioners. The cruelty of the torture and barbarity cannot be described in language. According to a 2006 report by the United States Department of State, among 250,000 people detained in labor camps, at least half were Falun Gong practitioners. The actual number could be much higher. In addition, David Matas, international human rights lawyer, and David Kilgour, former Secretary of State (Asia-Pacific) for Canada, formed an independent investigation team and released their report to the media, which concluded that in many places in China, the CCP harvested organs from living Falun Gong practitioners for lucrative profit and killed them in the process."

Among the 16 relatives of Canadian residents being persecuted in China are a doctor, a teacher, an engineer, an accountant, a worker, and a housewife. Calgary resident Mr. Liu Wenyu's wife was sentenced to twelve years of imprisonment for downloading Falun Gong truth-clarification literature from the Internet.

“Ms. Yang Liu and Her Family are Persecuted in Henan Province - Her Disabled Brother is Imprisoned Four Times”

“The Divine Power of Falun Dafa Restored My Health”