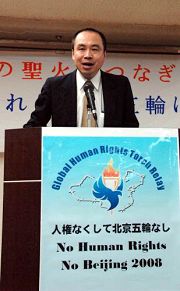 Ando Kan, deputy director of CIPFG, calls for an end to the CCP's persecution of Falun Gong 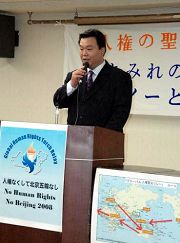 1. Stop the persecution of Falun Gong immediately and release all practitioners incarcerated for their faith.

3. Hold discussions with CIPFG to arrange details on the opening of labor camps, prisons, hospitals and related secret facilities for inspection by CIPFG independent investigators.

If satisfactory responses to our requests are not received on or before August 8, 2007, we will join all supporters from around the globe to boycott the "Crimes Against Humanity Olympics."

Mr. Kan said that there was not much time left until August 8. But the Chinese Communist Party (CCP) has not made any positive response to the CIPFG's requests. Each branch of the CIPFG Asia Delegation, including Taiwan, Hong Kong, Malaysia and Korea, held press conferences concurrently about the Global Human Rights Torch Relay.

The relay will start in Greece on August 9, reach Europe before October, Oceania in December, Africa and the Middle East before January, North and South America in March, Asia in April, Japan in May, and will terminate in Hong Kong. The torch will pass through five large cities in Japan, including Tokyo and Osaka.

A CIPFG member and director of the World Religion Federation said that his group was part of the World Peace Federation and has been paying attention to the CCP's persecution of Falun Gong for a long time.

Another member stated in a fax that he prayed for the success of the human rights torch relay and will pay attention to the activity. He said that justice will prevail.

Mr. Satou has paid attention to China's human rights situation for 20 years. After learning of the activity, he came to participate in the press conference. He said he was shocked that Jiang's faction spent half of the national income to persecute Falun Gong. He condemned the CCP for its use of such large resources to suppress people.

In addition, the CIPFG Japan branch received mail from citizens, who expressed their support for the human rights torch relay. "Chinese culture and its connotations, which the Japanese people respect and love, have been damaged by CCP. The CCP is a regime of killing. I will try my best to support the CIPFG and this activity. Go forward!"

Currently, the Global Human Rights Torch Relay has received a positive response across the world. Nearly one hundred cities have joined the relay, covering Europe, North America, Asia, Africa and Oceania. Many well known people have agreed to be relay ambassadors for the Global Human Rights Torch Relay to support CIPFG's effort to stop the CCP's eight-year-long persecution.