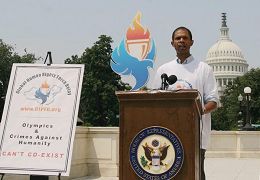 On the afternoon of August 3, a second press conference about the "Human Rights Torch Relay" was held in Washington DC. The press conference location was just outside the Cannon Office Building of the U.S. House of Representatives. Congressman Thaddeus McCotter and Hudson Institute scholar Mr. Michael Horowitz expressed their support for the Human Rights Torch Relay project. The theme of this project is: "The Beijing 2008 Olympic Games and Crimes against Humanity in China Cannot Co-exist." The first press conference was held on August 2 in the Longworth Building. On the same day Congressman Dana Rohrabacher proposed a bill to boycott the Beijing Olympic Games. Within 24 hours, a number of house representatives had co-sponsored the bill. 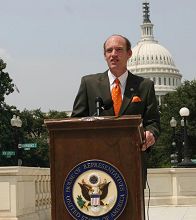 In his speech, congressman Thaddeus McCotter said: "I would like to advise people to do what they believe is in the best interest of their conscience and the most effective step they can take, such as what you are taking today. You are acting according to the dictates of conscience to free your fellow human beings. You found a novel and appropriate way, and I believe it is an effective way. I encourage all the people to do the same.

"It is a critical period of time that we do not forget about the upcoming Olympic Games that will be held in Beijing. I think the approach [Human Rights Torch Relay] is most novel and hopefully will penetrate the American conscience. I signed onto a bill offered by Dana Rohrabacher asking that the United States boycott the Olympics in Beijing, that the tyrannical communist regime begins to recognize and respect again the God-given human rights of their own citizens." 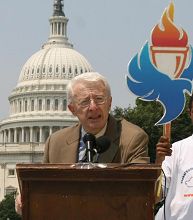 Michael Horowitz, director of Hudson Institute's Project for Civil Justice Reform and Project for International Religious Liberty, gave a speech as a member of the Coalition to Investigate the Persecution of Falun Gong (CIPFG). In his speech, Mr. Horowitz urged the Chinese Communist regime to respond to CIPFG's three demands.

He said: "This torch is going to be lit if China doesn't response to the three demands, and the reasonable demands that you made: One, to stop Falun Gong persecution; two, to stop persecuting brave Chinese human rights attorneys like Gao Zhisheng. I am sure my pronunciation is terrible but the world knows this great brave man and the sacrifice he endures to help your people; and until there is an independent investigation of the organ harvesting charges that have been made against China."

At the first press conference held on August 2, The Coalition to Investigate the Persecution of Falun Gong in China (CIPFG) announced that the Human Rights Torch will be lit for the first time in Athens on August 9. The organization estimated that the Torch will be relayed to more than 100 cities in five continents (Asia, Europe, North America, Oceania, and South America) to urge the world to recognize the horrifying human rights violations happening in China, to take actions to stop the organ harvesting atrocities and to prevent the 2008 Olympic Games from becoming another Berlin Olympic Games.